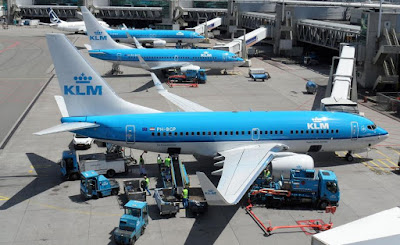 KLM works with three Chinese airline partners: China Eastern Airlines, China Southern Airlines and Xiamen Airlines. These partners have now stepped in to generously support KLM and the Netherlands by donating many tens of thousands of face masks and gloves to KLM in our struggle against the coronavirus outbreak.

In light of scarce resources at Dutch hospitals, KLM will in turn be helping the Erasmus MC in Rotterdam and other Dutch healthcare institutes.

Today, in the early hours of the morning, the first shipment arrived at Schiphol carried by one of Xiamen Airlines' aircraft.

On behalf of the employees of the three Chinese airlines, KLM President & CEO Pieter Elbers accepted this first shipment of in total around 90,000 face masks and 50,000 pairs of gloves.

Over the past 20 years, KLM has established a broad-based route network, coupled with especially close relations in China.

Before the outbreak of the corona crisis, KLM and its partners operated 59 flights a week from Schiphol to mainland China. Shipments of this nature serve to underscore the enormous significance of connections by air in general, and those with China in particular.

Medical supplies like this can only be transported swiftly and efficiently to the other side of the world by aircraft. This is especially important in times of scarcity and interdependence.

KLM President & CEO Pieter Elbers highlighted that: "Help of this nature from our Chinese partners China Eastern Airlines, China Southern Airlines and Xiamen Airlines is both incredibly generous and much appreciated.

Help like this from our Chinese friends serves to highlight just how close the ties are between China, the Netherlands and KLM. These are incredibly difficult times for our country and our company, so we are very pleased with this support for KLM and for the Netherlands.

Less than two months ago, we at KLM made a donation to China and now we have received fantastic and generous help ourselves. This certainly feels good."

On behalf of all Dutch healthcare institutes, LNAZ is coordinating the stocks of personal protective gear for healthcare workers during the coronavirus pandemic.

Ernst Kuipers, CEO Erasmus MC thanked KLM and said, "This donation will help all Dutch healthcare institutes at a critical phase of caring for patients across the Netherlands. We are also incredibly grateful to KLM's Chinese partners for this."

KLM will be flying from Hong Kong to Amsterdam at 1:35 p.m. on Tuesday, local time. The airline has been granted an exemption from the Dutch aviation authorities for the landing ban that applies to flights from the Chinese city, the Consulate General in Hong Kong announced.

Dutch and residents of other EU or Schengen countries stuck in Hong Kong are advised to contact the Dutch airline.

KLM is flying two final flights from Seoul, South Korea this week. The first will be on Tuesday, the second on Thursday, and both flights may be booked on KLM's website.

According to Van Elswijk, who is a purser for KLM, cabin crew members are trying to stick to the government guidelines of staying 1.5 meters from others, but that is not always possible. "If you work in a full aircraft with 300 passengers, you cannot meet the guidelines that are set," he said.

And if crew members do not want to fly on a certain flight, their employers are open to discuss their concerns and alternatives, he said.

Because halting all air traffic is not yet an option, Van Elswijk said to Hart van Nederland. There are still many Dutch people abroad. They still have to be picked up.

Meanwhile, the first batch of Rwandans who were stranded abroad amid the novel coronavirus outbreak arrived in Rwanda Sunday, thanks to the Government’s partnership with Dutch airline KLM.

Most governments placed their countries into lockdown with no flights allowed to fly in as a measure to contain Covid-19, which left many people stranded in other countries, including Rwandans.

Rwanda itself put a stop to passenger planes and only emergence landings and cargo transporters are allowed into the country.

Rwandan nationals especially students who study abroad and other diaspora communities had expressed concern recently after failing to find a way to come back home.

The Government had promised that it was working out an alternative to rescue nationals and legal residents who were facing travel difficulties as a result of restrictions imposed by different countries.

“It’s true there is an arrangement between the Government of Rwanda and KLM! The 1st flight was yesterday, another departed today!” Jean Pierre Karabaranga, Rwanda’s Ambassador to The Hague said.

Karabaranga added that the last flight is expected Wednesday 25.

The Ambassador indicated that they have been spreading information regarding the arrangement by informing the diaspora members.

The Minister in charge of East African Community at the Foreign Affairs Ministry, Olivier Nduhungirehe, said this follows a conversation with ambassadors to facilitate all Rwandans abroad.

We had a video call with all ambassadors on Friday and they are facilitating everyone who wants to come back to Rwanda to be able to get here, he noted.

Rwanda has so far registered 19 Covid-19 cases as of Sunday, according to the Ministry of Health.
at March 26, 2020

Contact us with confidence; our staff is right here to answer all your questions about proudly owning an industrial 3D printer, perceive your 3D printing needs, and offer the proper solution. Explore Raise3D 3D wool mittens printing business solutions in manufacturing and engineering. Don’t miss the opportunity to see our products in actual life and find out what our group of 3D printing experts can do for you. In skilled ($10,000+ worth ranges) 3D printing, brands like Markforged, Desktop Metal, Carbon 3D, Stratasys and 3D Systems are extensively adopted. For mid-range 3D printers, Prusa make the fantastic i3 MK3S+, and different brands similar to Flashforge, Dremel, Qidi Tech, Formlabs, Ultimaker, Makerbot and Raise3D are highly-reputed.