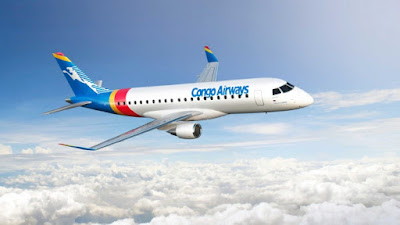 Embraer and Congo Airways have signed a firm order for two E175 aircraft, with purchase rights for a further two.

The deal has a total value of US$194.4 million at current list prices, with all purchase rights exercised.

Desire Bantu, chief executive of Congo Airways, said: These new jets will replace our current turboprop offering and allow us to serve routes both within the Democratic Republic of Congo, and regionally to west, central, and southern Africa, from our hub in Kinshasa.

“We will now have the flexibility and the right sized aircraft to serve our market, which is growing so rapidly an additional order may be required, for which the E2 is a particularly compelling option.”

The aircraft will be configured in a dual class layout seating 76 passengers in total, with 12 in business class.

Deliveries will begin in the fourth quarter of 2020.

“We look forward to supporting Congo Airways as they continue to upgrade their offering to their customers.”

Embraer is the world’s leading manufacturer of commercial aircraft up to 150 seats with more than 100 customers across the world.

Congo Airways, the flag carrier of the Democratic Republic of the Congo (DRC), is exploring the possibility of basing an aircraft in the neighboring country of Congo Brazzaville.

The airline recently grounded its fifth-freedom route from Kinshasa, DRC’s capital, via Douala in Cameroon to Cotonou in Benin, citing low passenger demand. But the two overseas markets could re-join the network as part of a five-point service originating in Brazzaville.

We want to open also Abidjan in Cote d'Ivoire and Libreville in Gabon, but according to our study we must connect Libreville to Brazzaville,chief executive Desire Balazire Bantu said.

If the aircraft goes Brazzaville, Libreville, Douala, Cotonou and Abidjan it will make a nice job.

The round trip could be completed in one day with two sets of flight crews, he added.

Congo Airways launched Kinshasa-Douala-Cotonou flights in December 2018 with a 160-seat Airbus A320. Management had hoped to serve the route with a 69-seat De Havilland Canada Dash-8 Q400, but settled for the larger jet due to maintenance and scheduling commitments elsewhere in the network.

The original routing is unlikely to be restored even if a Q400 becomes available, Balazire said, as the first leg can only attract about 35 passengers each way.

Opening a base in Brazzaville would also allow Congo Airways to launch flights to Bangui, the capital of the Central African Republic.

The airport asked us to go there, but there is no market for travel from Bangui to Kinshasa, he noted. But there is from Brazzaville to Bangui.

Congo Brazzaville has not had a flag carrier since 2016, when Equatorial Congo Airlines (ECAir) collapsed under a huge debt pile.

Congo Airways launched in 2015 and currently deploys two A320s and two Q400s on flights between 14 airports in the DRC plus Johannesburg in South Africa.