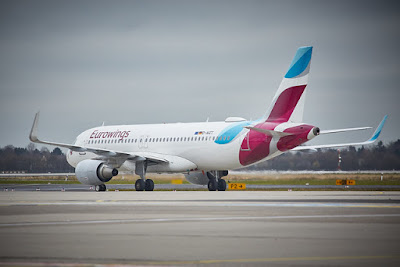 Eurowings, the low-cost airline owned by Lufthansa , said it would cut a third of the jobs at its headquarters as part of wider efforts to return the German airline group to profitability after a major state bailout.

We have around 1,000 staff at head office and of those we will reduce 300, Eurowings Chief Executive Jens Bischof told a briefing in Duesseldorf.

Germany threw Lufthansa a 9 billion euro ($9.8 billion) lifeline on Monday, agreeing a bailout which gives Berlin a veto in the event of a hostile bid for the airline.

Bischof, in remarks did not give figures for job reductions in other operational areas at Eurowings, which employs a total of around 4,000 staff.

He said the outcome would depend on negotiations with staff representatives and how work is allocated in future between Lufthansa and Eurowings. It would likely take until 2023 before activity returns to last year's levels.

GERMAN airline Eurowings is reactivating its base in Spain holiday island Mallorca in another good sign for the recovery of the Balearic Island tourism sector.

The airline, a subsidiary of Lufthansa, will be taking off from Mallorca capital Palma next Saturday June 27 with a flight to German city Hannover following a break of some three months due to the Covid-19 crisis.

The company will be operating more than 50 flights a week from Palma, going up to nearly 170 by the end of July, with connections to 16 airports in Germany and Austria.

To begin with Eurowings will operate with two A-320 aircraft stationed at Palma’s Son San Joan airport, going up to three over the summer

He also thanked company employees, who he said had had to endure a lot of uncertainty and show staying power in the past weeks.

Eurowings will take off again at the end of June with its international flight operation Eurowings Europe. The first flight after a break of around three months will take place on 27 June at 07:45 from Palma to Hanover.

With the reopening of the Mallorca base, Eurowings is underlining its position as Germany’s largest holiday airline. With the additional aircraft stationed on the Balearic island, Eurowings is operating a flight schedule that supplements numerous Mallorca connections at major Eurowings locations such as Dusseldorf, Hamburg, Stuttgart and Cologne/Bonn with additional destinations in Germany and Austria.

With the beginning of the summer holidays in some German federal states, Eurowings will again offer more than 50 Mallorca flights per week. During the peak holiday season from the end of July, the number of flights will then increase to 168 weekly Mallorca flights.

A total of 16 airports in Germany and Austria will then be connected to Mallorca with Eurowings again. The airline had opened its first location in non-German-speaking countries in 2017 on Mallorca.

Eurowings thus became the leading carrier for flights to Mallorca to Germany and Austria.

With the end of the worldwide travel warning and the lifting of travel restrictions for Spain, customer interest in sunny destinations is growing by leaps and bounds. Therefore the airline has decided to reactivate its crews based in Palma.

Eurowings Europe will initially start operations with two Airbus A320s and increase to three aircraft over the summer. The airline also operates additional international stations for Eurowings in Salzburg (Austria) and Pristina (Kosovo).

We are very pleased that Eurowings Europe is able to take off again, said Robert Jahn, Managing Director of Eurowings Europe. I would like to thank our guests for their patience and understanding during this difficult phase.

And I would especially like to thank our Eurowings Europe team, who had to endure a lot of uncertainty and show staying power in the past weeks.

We are all the more pleased that we can now start again and be there for our holiday guests.

Mallorca is booming with Eurowings, which uses A330 wide-body to Palma Airport.

Eurowings is offering more than 160 additional flights by Airbus A330 from Cologne/Bonn, Stuttgart and Düsseldorf over the next three months.

Eurowings is strengthening its position as Germany’s largest holiday airline. The Lufthansa subsidiary is expanding its route portfolio in the direction of South-East Europe and will be flying to Bulgaria’s Black Sea coast on a large scale for the first time in summer 2020.

The two new up-and-coming holiday destinations being offered are Varna and Burgas.

Flights will be available from six German airports from 6 July. In addition to the major Eurowings stations in Düsseldorf, Hamburg and Stuttgart, the airports of Munich, Hanover and Leipzig will also be directly connected to the Bulgarian coast from July.

The airline’s programme will then include more than 20 weekly flights to Burgas and Varna. Among the European sunshine destinations, Bulgaria is becoming the new holiday favourite for inexpensive summer holidays, both for families and for the younger public.
at June 22, 2020

It is very important to have good thoughts in mind to write a beautiful post, and your mind seems very clear, that is why you have written such a beautiful post, this post is worthy of praise, the praise of this post will be less.
Escorts Services in Palam Farms
gurugram event
call girls in noida
DLF Cyber city Escorts
escorts in gurugram
Escorts Service in Sector 15
Sector 46 Escorts
bilaspur independent escorts