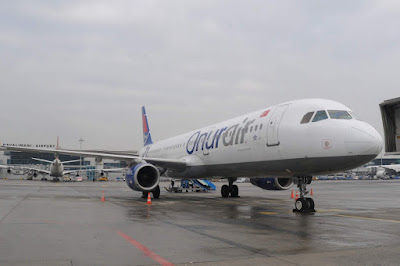 Onur Air said in a statement that it will resume operations with new safety and health measures implemented following more than two months of suspension of flights as part of the restrictions to combat the COVID-19 pandemic.

Flights were suspended on March 28 amid worldwide coronavirus restrictions.

The airline will operate one daily round trip between Istanbul and the Mediterranean resort city of Antalya and the Black Sea city of Trabzon and a trip to the Aegean resort town of Bodrum four days a week, starting from July 26.

Onur Air CEO Teoman Tosun said the company’s priority is to ensure maximum security for the passengers and to offer the cheapest prices available.

Our aircraft are being disinfected in line with national and international health standards to prevent the spread of the virus, Tosun said.

The spread of the virus suspended touristic activity from March as Turkey was quick to close its borders and halt flights and other modes of transportation.

Turkey’s flag carrier Turkish Airlines, SunExpress its joint venture with Lufthansa and major budget airline Pegasus have already resumed domestic flights between major routes in the first week of June, after the lifting of travel restrictions due to the pandemic.

Onur Air is a low-cost airline with its headquarters in the Technical Hangar B at Istanbul Ataturk Airport in Yeşilköy, Istanbul, Turkey.

It operates mostly domestic scheduled services, as well as a wide range of charter flights out of its base at Istanbul Airport. Its aircraft and crews also operate for its partly owned leisure subsidiary Holiday Europe.

Onur Air was established on 14 April 1992 and started revenue operations using a wet-leased Airbus A320 with a flight to Ercan in North Cyprus on 14 May of that year.

Onur means proud, self-esteem in Turkish. Over the next years, the Onurair fleet grew, so that by the end of 1995, it included nine aircraft.

Previously its head office was in Florya, Bakırköy, Istanbul.

In 1996, Ten Tour acquired ownership of the airline. By 1997 McDonnell Douglas MD-80 twin-jet airliners had been added to the fleet. Due to a recession, Onur Air had to reduce the size of its fleet to 13 in 1998, and then to 9 in 1999. Since then the airline has expanded again.

As of 6 April 2019 all of Onur Air's flights from their former base at Ataturk Airport have been relocated to the new Istanbul Airport.[

In August 2019, Onur Air established a new, partly-owned subsidiary named Holiday Europe for leisure flights between Europe and destinations around the Mediterranean. Onur Air provides aircraft and crews for the new brand.

On 17 June 2003, Onur Air Flight 2263, a McDonnell Douglas MD-88 registration TC-ONP overshot the runway at Groningen Airport Eelde following an aborted take-off. There were no injuries, but the airline was accused of security breaches.

On 12 May 2005, Onur Air was denied access to Dutch airspace for a month. Several incidents were the cause of the suspension of the airline. Negotiations took place between the Dutch authorities and Onur Air and on 24 May 2005 Onur Air had permission to fly from and to the Netherlands again.

On 1 January 2007, the cargo hold of a McDonnell Douglas MD-88 aircraft burst open upon landing at Ataturk International Airport, spilling luggage onto the runway.

On 7 September 2007, an Airbus A321 aircraft lost cabin pressure on a charter flight from Dalaman Airport to Birmingham Airport, resulting in an emergency landing at Atatürk International Airport. Passenger reports included a smoking engine and broken down oxygen masks.

On 20 August 2011, an Onur Air pilot forgot to contact Munich Air Traffic Control and caused the quick reaction air defence of both Germany and Austria to send four Eurofighter Typhoons to intercept the company's A321.

It is very important to have good thoughts in mind to write a beautiful post, and your mind seems very clear, that is why you have written such a beautiful post, this post is worthy of praise, the praise of this post will be less.
Escorts Services in Palam Farms
gurugram event
call girls in noida
DLF Cyber city Escorts
escorts in gurugram
Escorts Service in Sector 15
Sector 46 Escorts
bilaspur independent escorts

good article I like the information you mentioned.thank you so much :)