AFRICA: Kanga, An African Garment That Speaks And Carries A Message 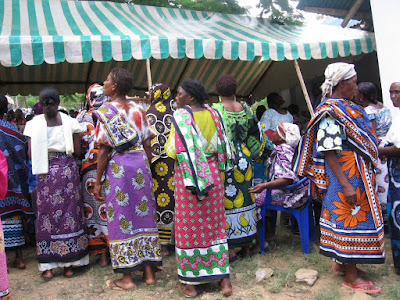 The kanga, is a colourful fabric similar to kitenge, but lighter, worn by women and occasionally by men throughout the African Great Lakes region.

It is a piece of printed cotton fabric, about 1.5 m by 1 m, often with a border along all four sides called pindo in Swahili, and a central part (mji) which differs in design from the borders.

They are sold in pairs, which can then be cut and hemmed to be used as a set.

Whereas kitenge is a more formal fabric used for nice clothing, the kanga is much more than a clothing piece, it can be used as a skirt, head-wrap, apron, pot-holder, towel, and much more.

The kanga is culturally significant on Eastern coast of Africa, often given as a gift for birthdays or other special occasions.

They are given to mourning families in Tanzania after the loss of a family member as part of a michengo or collection, contribution or condolence into which many community members put a bit of money to support the family in their grief.

Kangas are also similar to Kishutu and Kikoy which are traditionally worn by men. 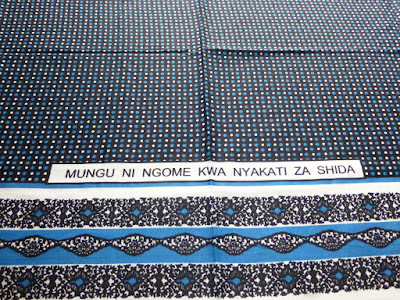 The Kishutu is one of the earliest known designs, probably named after a town in Tanzania, they are particular given to young brides as part of their dowry or by healers to cast off evil spirits.

Due to its ritual function they do not always include a proverb.

The earliest pattern of the kanga was patterned with small dots or speckles, which look like the plumage of the guinea fowl, also called kanga in Swahili.

This is where the name comes from, contrary to the belief that it comes from a Swahili verb for to close.

Kangas have been a traditional type of dress amongst women in East Africa since the 19th century.

It was developed from a type of unbleached cotton cloth. The cloth was known as merikani in Zanzibar, a Swahili noun derived from the adjective American, indicative of the place it originated.

This dyed merikani was referred to as kaniki. People despised kaniki due to its association with slavery.

Ex-slave women seeking to become part of the Swahili society began to decorate their merikani clothes.

They did this using one of three techniques; a form of resist dying, a form of block printing or hand painting. 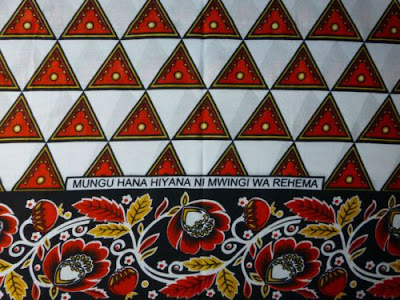 After slavery was abolished in 1897, Kangas began to be used for self-empowerment and to indicate that the wearer had personal wealth.

According to other sources, the origin is in the kerchief squares called lencos brought by Portuguese traders from India and Arabia.

Stylish ladies in Zanzibar and Mombasa, started to use them stitching together six kerchiefs in a 3X2 pattern to create one large rectangular wrap.

Soon they became popular in the whole coastal region, later expanding inland to the Great Lakes region. They are still known as lesos or lessos in some localities, after the Portuguese word.

Until the mid-twentieth century, they were mostly designed and printed in India, the Far East and Europe.

Since the 1950s kangas started to be printed also in the city of Morogoro in Tanzania by MeTL Group Textile Company and Kenya by Rivatex and Thika Cloth Mills Ltd are some of the largest manufacturers in Kenya and other countries on the African continent.

In the early 1900s, proverbs, sayings, aphorisms and slogans were added to kanga's. A trader in Mombasa, Kaderdina Hajee Essak, also known as Abdulla, began to distinguish his kangas with the mark"K.H.E. - Mali ya Abdulla, to which he often added a proverb in Swahili.

Initially they were printed in Arabic script, and later in Roman letters. Towards the eastern part of the region, phrases in Kiswahili are traditional, while in central areas phrases in both Kiswahili and Lingala are popular. 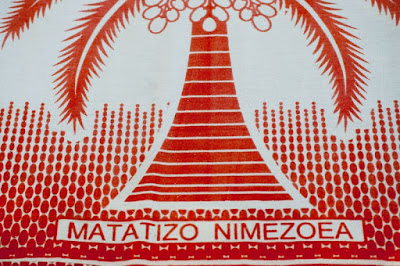 One distinguishing feature of kanga's is that they always bear a saying in Kiswahili.

Description and appearance of the Kanga

- They are rectangular and always have a border along all four sides.

- Often kangas have a central symbol.

- All kangas bear a saying in Kiswahili.

There are many different ways to wear kangas. One traditional way of wearing the kanga is to wrap one piece as a shawl, to cover the head and shoulders, and another piece wrapped around the waist.

- The pindo or wide border

- Ujumbe or jina written in Kiswahili, is featured on a strip which contains a message. It is less commonly written in Arabic or Comorian. 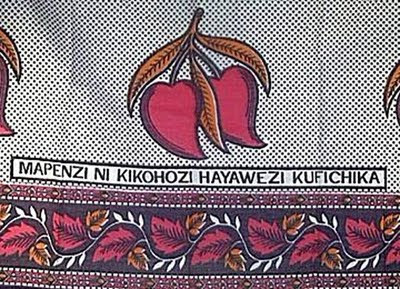 Other countries which produce their own Kangas write the Kanga messages/names in their main languages: in Madagascar (Malagasy Republic) where they are known as lambas, they feature ohabolana, traditional proverbs written in Malagas.

They are also produced in Zambia and Malawi. This message is called the jina or name of the kanga. Messages are often in the form of riddles or proverbs.

When giving a kanga as a gift, one must be mindful of the proverb written thereon, as they can be somewhat insulting. The proverb must be relevant to the occasion.

Occasionally, one of these is given as a gift at a wedding to express a person's opinion that the couple shouldn't be married! However, most of the messages express kind sentiments and good wishes. 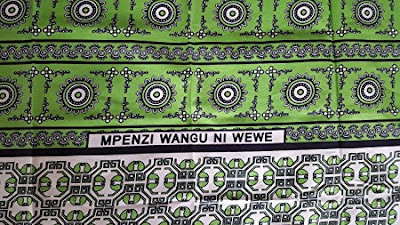 Some examples of proverbs written on Kangas:

- Mkipendana mambo huwa sawa: Everything is all right if you love each other

- Japo sipati tamaa sikati: Even though I have nothing, I have not given up my desire to get what I want

- Sisi sote abiria dereva ni Mungu: We are all passengers, God is the driver 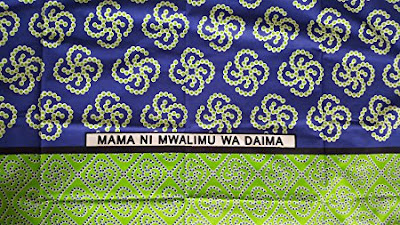 - Naogopa simba na meno yake siogopi mtu kwa maneno yake: I’m afraid of a lion with its strong teeth but not a man with his words.

- Leo ni siku ya shangwe na vigelegele: Today is a day for celebrations and ululations.