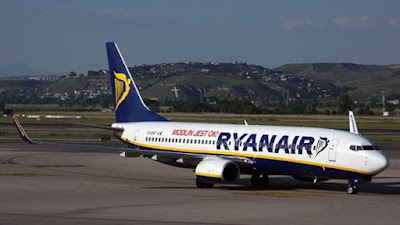 Ryanair Boeing 737-800, performing flight from Barcelona to Hamburg, landed on Hamburg’s runway 05 following a non-precision approach but overran the displaced end of the runway.

The aircraft vacated the runway via taxiway E6 instead of last usable exit A6 and taxied to the apron.

The occurrence aircraft remained on the ground in Hamburg for 7 hours before returning to service.

On May 17th 2018 Germany’s DFS (ATC Provider) reported the aircraft was unable to stop before the last exit A6 and vacated via the next exit immediately before the begining of the reconstruction works.

The area between A6 and E6 was kept clear as a safety buffer zone, hence no machinery, men or other obstacles were on the runway in this area and no critical situation arose.

Like all runway excursions this occurrence is being investigated internally by the DFS.

Airport and the works permitting authorities (LBA) have been informed about the runway excursion.

Meanwhile, Ryanair passengers will soon have less time to check-in unless they pay extra to reserve their seat.

The budget airline said its check-in window for passengers who have not paid for reserved seating will shrink from four days to 48 hours starting June 13.

But if customers pay for a reserved seat, which costs from £4 about $5.50 each way but rises to £15 about $20 for seats with more leg room, they will be allowed to check in up to 60 days before flying.

Passengers who turn up at the airport and have not already checked in online will be charged an extra £55 about $74.

Passengers now have to pay £5 about $6.75 for priority boarding to avoid having their main cabin bag checked in to the hold at their departure gate.

The new check-in policy could encourage travellers on weekend breaks to pay for reserved seating or be forced to find ways to check in online while they are on holiday.

In 2016, passengers could check in for free up to a week before departure, but this was cut to four days and will now move to 48 hours.

The airline has also faced widespread criticism for its seat allocation policy when passengers haven't paid to reserve a seat.

Many couples travelling together have reported finding themselves seated at opposite ends of the aircraft despite Ryanair claiming that the allocation policy is random.

A Ryanair spokesman said Online check-in for those customers who don’t choose reserved seats will be available from 48 hours to 2 hours pre-departure for all flights from Wednesday, 13th June.

This will give reserve seat customers more time to select their preferred seats prior to departure.