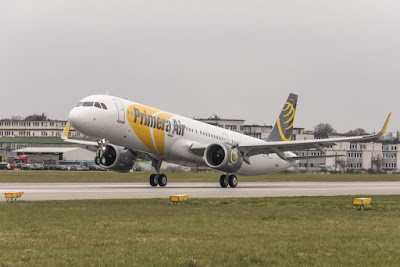 Primera Air, which is venturing into the combative transatlantic market this summer, has added three new routes from three different bases, all launched on 18 May.

Neither of these routes faces any direct competition. The final sector of the transatlantic trio launched was from Paris CDG (CDG) to Newark.

With incumbents United Airlines (12 times weekly) and Delta Air Lines (five) already operating this airport pair, Primera’s passengers will at least in the short-term be stepping on board a leased euroAtlantic Airways 767-300 to take them to New York on a daily basis.

Primera Air, has commenced its first transatlantic flights from London Stansted (STN), beginning a daily operation to New York Newark (EWR), just over a week after launching flights to Malaga and Alicante.

The start of services are being flown by a leased 757-200, to be replaced with the carrier’s A321LRs once they are cleared for operations.

While there is no direct competition on the airport pair, Air India, British Airways, United Airlines and Virgin Atlantic Airways all offer services from London Heathrow.

Primera Air inaugurated operations from its new base in Birmingham (BHX) on 14 May, with its first two routes being Spanish links to Malaga (AGP) and Palma de Mallorca (PMI).

The first two routes come ahead of the airline’s transatlantic debut from the city to New York Newark on 18 May, with Toronto Pearson flights following soon after in June.

Anastasija Visnakova, CCO of Primera Air, said of the Birmingham base opening: It was a pleasure to welcome our passengers on the inaugural service to Malaga.

The range of destinations, both European and transatlantic, at fantastic prices creates more choice for passengers travelling from Birmingham Airport.

We have growth plans for Birmingham and we look forward to working with the airport and serving the region’s leisure and business travellers throughout 2018 and beyond.

While both Spanish routes are new to Primera Air, both are already well served from Birmingham.

Along with its new routes from Birmingham, Primera Air also began services from Aalborg (AAL) to Athens (ATH) this week.

Initiated on 10 May, the route between the Danish and Greek cities will be flown by the airline weekly (Thursdays) facing no direct competition.

The 2,366-kilometre connection, along with the airline’s Birmingham services, will be flown by 737-800s. No other airline currently links Aalborg to Athens.

Primera Air has recently confirmed its intention to begin flights over the Atlantic to Boston and New York Newark, starting initially with flights to both destinations from Birmingham, London Stansted and Paris CDG/

With routes scheduled to begin in April and May next year. All routes will be flown by A321neos, of which the carrier currently has an order for eight, plus two A321LRs, with deliveries expected in Q1 2018.

It should be noted that the carrier also has a firm order for eight 737 MAX 9s.

With the news of the carrier’s transatlantic venture, Primera Air will join the list of airlines including Norwegian, LEVEL, Eurowings, WestJet and WOW air in offering low-cost long-haul flights to North America from Europe.

Based in Scandinavia, Primera Air was initially launched to operate charters for major Scandinavian tour operators, but gradually it started selling tickets on some of its fixed charters in 2013.

The continued success allowed Primera Air to increase both the number of routes and flight frequency, resulting in a mixed charter/scheduled carrier business model.

Today the majority of Primera Air flights are scheduled, although some flights combine charter and scheduled passengers, and separate full charter flights are also operated.

This year Primera Air will increase its annual seat capacity by close to 15% when referring to OAG schedules, with the airline expected to operate 1.24 million seats in 2017.

However, what is very clear is the seasonality of the carrier, with its peak month of July in 2017 seeing 187% more seats than the carrier’s lowest month this year, December.

While the carrier has increased its seat capacity this year, the airline has done it sustainably, with it not increasing its seasonality profile.

Instead it has grown capacity throughout the year, with all months except three (March, June and October) seeing double-digit growth in seat capacity.

Now while services from both Birmingham and Stansted will not see direct competition, flights from CDG will go head-to-head with a number of airlines.

There are also 60 weekly flights in summer between CDG and New York JFK, a route that is flown by LCC Norwegian four times weekly on 787-8s.

So while Birmingham and Stansted are monopoly markets for Primera Air over the Atlantic, it will have a tough job cracking the market from the French capital.

Particularly with there already being LCC competition from Norwegian, which also links CDG to Fort Lauderdale and Los Angeles.

The carrier will also in S18 serve Boston and Newark from CDG, along with routes to Denver, Oakland and Orlando.

What also makes it harder for Primera Air is that it does not have brand awareness in France or the UK, so strong marketing is going to have to be done if the venture is going to be successful.

Currently the airline’s biggest market is Denmark, with Billund (14% of weekly departing seats) and Copenhagen (13%) being the carrier’s largest bases this summer.