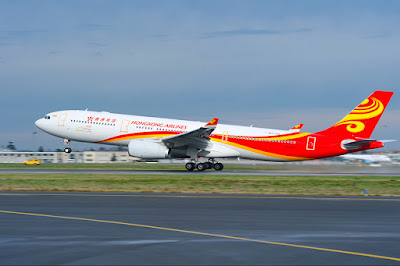 The new seasonal service, which will operate thrice weekly, marks the airline’s entry into Europe.

Hong Kong and Russia have enjoyed a strong bilateral partnership as seen in the visa-free arrangements for travel between the two destinations.

Our new service will provide more choice and greater convenience as more travellers look to Russia for a holiday getaway.

The internationally-acclaimed full-service airline Hong Kong Airlines announced that it will add frequency of its flight service to Osaka to two flights daily and that to Sapporo to one flight daily.

The arrangement is believed to meet the growing travel and trade demand between Hong Kong and the two cities, further strengthening the airline’s network in Japan.

Satisfying response has been received since the commencement of flight service to Sapporo and Osaka in December, in view of which we have been proactively exploring to add frequency to these routes so as to meet the travel demand of our passengers.

In addition, Hong Kong Airlines will launch its flight service to Yonago soon on 14 September, bringing more travel choices for the passengers.

Hong Kong Airlines will then have 8 flight destinations in Japan, which represents a further upgrade of its destination network in the country.

The current operating fleet is made up of 32 Airbus aircraft with an average age of around 3.9 years, consisting of 27 passenger aircraft and five freighters, being one of the youngest fleet in the world.

Hong Kong Airlines has been awarded the internationally acclaimed 4-star rating from Skytrax since 2011.

Adhering to the concept of Fresh and Very Hong Kong, Hong Kong Airlines is committed to Bringing Greater Journeys Sky High, and is dedicated to providing a pleasant and enjoyable journey to all passengers.

Hong Kong Airlines Ltd, IATA: HX is an airline based in Hong Kong, with its headquarters in the Tung Chung district and its main hub at Hong Kong International Airport.

It was established in 2006 as a member of the HNA Group.

And the newly launched Vancouver and Los Angeles routes in 2017. The airline has a combined fleet of 35 aircraft. The current passenger fleet has 31 aircraft with an average age of about 5 years as of September 2017.