PANAMA: Colon, A Very Dangerous City,Walking Around Not Advisable. Enjoy The Sights 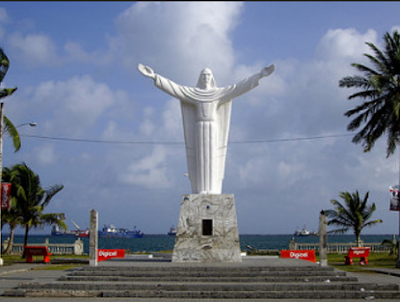 Colón is a city in Central Panama. The town is in poor condition and notorious for its high crime rate, but it is worth driving around to look at the culture, people and architecture.

Colón is the capital of Colón Province, in Panama. It sits on the Caribbean coast, at the entrance to the Panama Canal.

Just west of the city, at the mouth of the Chagres River, Fort San Lorenzo is a well-preserved colonial military structure.

Colón is a Panamanian city and sea port beside the Caribbean Sea, lying near the Atlantic entrance to the Panama Canal.

It is the capital of Panama's Colón Province and has traditionally been known as Panama's second city.

Originally, it was located entirely on Manzanillo Island, surrounded by Limon Bay, Manzanillo Bay and the Folks River.

But since the disestablishment of the Panama Canal Zone, the city's limits have been redefined to include Fort Gulick, a former U.S. Army base, as well the former Canal Zone towns of Cristobal, Margarita and Coco Solo.

The city was founded by Americans in 1850 as the Atlantic terminal of the Panama Railroad, then under construction to meet the gold rush demand for a fast route to California.

For a number of years early in its history, the sizable United States emigre community called the town Aspinwall after Panama Railroad promoter William Henry Aspinwall.

While the city's Hispanic community called it Colon in honor of Christopher Columbus.

The city was founded on the western end of a treacherously marshy islet known as Manzanillo Island.

Much of the city was destroyed in the Burning of Colón during the Colombian Civil War of 1885, and again during a massive fire in 1915. The Great Colon Fire of April 13–14, 1940 destroyed one third of the city.

Fort De Lesseps was a small U.S. Army Coast Artillery Corps fort located at the northern tip of the city. It was named after the canal developer Ferdinand de Lesseps.

In 1948, the southeastern corner of Manzanillo Island was designated as the Colón Free Trade Zone.

The Free Trade Zone has since been expanded through land reclamation on the Folks River and annexation of parts of France Field, now Enrique Adolfo Jimenez Airport and Coco Solo.

During its heyday, Colon was home to dozens of nightclubs, cabarets, and movie theaters.

It was known for its citizens' civic pride, orderly appearance, and outstanding native sons and daughters.

Politically instigated riots in the 1960s destroyed the city's municipal palace and signaled the start of the city's decline, which was further accelerated by the military dictatorships of Omar Torrijos and Manuel Noriega from 1968 to 1987.

A massive restoration and reconstruction project, involving parks, avenues and historic buildings and monuments, began in late 2014 and uses the hashtags #RenovaciónColón, #CiudadDeColón, #RenovationColon or Renovation of Colón and #CityOfColon.

The First Baptist Church of Colón, Panama, is one of the buildings whose renovation has been completed.

Like most of the Caribbean coast of Central America, Colón possesses an extremely wet tropical climate owing to the powerful, wet trade winds flowing onto high mountains throughout the year.

Unlike most parts of this coast, however, February and March are sufficiently dry that Colón fits into the tropical monsoon climate category rather than a tropical rainforest climate (Af) as found in most Caribbean coastal areas.

Nonetheless, the June to December period, with an average monthly rainfall of around 415 millimetres or 16.3 inches, is so wet that Colón rivals Honduras’ La Ceiba as the wettest sizable city in Central America.

With the city's economic decline, many of its upper and middle-class residents left, reducing its ethnic diversity.

Today, sizable South Asian and Arab communities live in the remaining prosperous areas of the city, as well as in gated communities outside it.

The majority of the city's population is of West Indian or mixed mestizo-hispanic ancestry.

Colón was home to some of the best-educated and most well-heeled Panamanians families of West Indian heritage, such as the Drews, the Fords, the Moodys, the Robinsons, the Beebys, the Archibolds, the Edwards, the Crowns, the Hoys, the Warehams, the Abrahams, and the Mckintoshs.

From these families sprang the teachers, professors, doctors, lawyers, engineers, businessmen, and politicians that contributed to the city's prosperity.

Most of them eventually left the city for the United States or the United Kingdom. Their influence may still be seen, however, in their descendants that remain in the province.

Colón was also home to Las Amigas de la Caridad or Women of Charity, a charitable organization of women of Caribbean descent.

The organization met largely in the home of Gladys Booth Ford and her stepdaughter Ruby Ford Drew at Calle 7 and Avenida Sta. Isabel. Ruby Drew was a long-standing member of Christ Church by the Sea.

Colón is home to Correcaminos Colon, 2016 Basketball Champion of Panama and member of the FIBA Americas League. The team plays its home games at the Arena Panamá Al Brown.

A luxury train connects Colón with Panama City and the ride along the canal is very beautiful. Colón is a stop for many cruise ships and there is also a frequent bus service to/from Panama City.

From Cartagena in Columbia, travel by ferry. There is a new twice-weekly ferry service between Colón and Cartagena, taking approximately 17hours to make the crossing and costing US$113 (seat) or US$180 (bunk).

Parks and Statues, most are by the shore area. The most notable is the one you see coming into Colón on Central Ave.

If tourists or businessmen for some reason have to stay overnight in Colón and need a SAFE place to eat, use an ATM machine, stock up on supplies, etc., their best best would be to go to the shopping plaza/cruise ship port Colón 2000.

There are two restaurants there Cafe Iguana and a Subway, a Super 99 grocery store, a Western Union branch, and an internet cafe.

The main thing to emphasize is that it's 100% safe as long as you stay within the plaza area, there are both private guards and actual Panamanian police watching over it.

In the back there are some halfway-decent souvenir shops and you can watch boats go by.

ow dangerous the city itself is is, so well-known there isn't much, but Colón 2000 is at least one area you can breathe easy in and get some errands run if you need to.

Columbus Cathedral. Beautiful Catholic church that's worth a picture, but don't leave the taxi and walk around there.

Roll down the window and take the picture, then quickly roll it back up again.

Not as impressive as the Miraflores Locks near Panama City, but if you want to see where the ships enter and leave on the Caribbean side as opposed to the Pacific side, here it is.

Not bad really, there's a souvenir shop here as well.

List of Monuments Not to Miss. Christopher Columbus statue, Christ statue and Virgin Mary statue, both near the Seawall, Shell Monument, Aspinwall Monument, and Monument of the Students' Revolution.

Luckily pictures of these can be taken relatively easily, you can even leave your taxi briefly.

La Zona Libre. A walled compound within Colón, and the second largest free trade zone in the world after Hong Kong.

Unfortunately it is not aimed at tourists but to wholesalers, so it's not the shopping paradise you might imagine.

Anything bought here is shipped to the airport and can be picked up only when you leave Panama, with the exception of small items you can carry out.

If you're a foreign tourist and just buy a bottle of perfume or an iPod or something like that while you're in the Zona Libre, that's fine, but you will not be allowed to leave with big bags full of stuff.

Seafood soup $4,00, was a great treat with three or four different types of fish in a tasty tomatoe base.

Have with rice and fried plaintans with salsa. If your not into seafood try the roasted chicken with rice or potatoes $1.65.

Restaurante Eugenio A great spot for breakfast that is frequented by the locals. A well-known spot that serves Panamanian comfort food such as hojaldres, chicharrones, beef stews, mondongo, fried empanadas. Always packed, so go early!

Melia Panama Canal, Antigua Escuela de Las Americas. Overpriced and not great service but at least it's safe and has an interesting history.

Plus it has a casino and a good restaurant. Acropolis . $5 an hour or $10 whole night.

Colón is a sea port on the Caribbean Sea coast of Panama.

The city lies near the Atlantic entrance to the Panama Canal. It is capital of Panama's Colón Province and has traditionally been known as Panama's second city.

Three modern ports make Colón one of the most important ports of the Caribbean Sea.

Panama's Colon is best known as the gateway to the Miraflores Locks, where visitors can watch one of the world's greatest feats of engineering the Panama Canal in action.

But, the famous canal is only one of the region's many attractions.

Colon is home to the world's first transcontinental railway, and its magnificently juddering red and gold trains traverse Central America from the Atlantic to the Pacific in a single afternoon.

The country's vast, virgin rainforest is home to sloths, 10,000 plant species and 900 species of birds, including harpy eagles.

The province of Colon rich in history and endowed with pristine beaches and exotic plants and birdlife will certainly repay the effort.

Yes, it has its problems, but there are as many good, honest, welcoming people here as anywhere.

A visit to Colon gives you the rare opportunity to see a country that has been way off the beaten track for many years and is, in some cases, truly unspoiled.

Gatun Locks: The biggest locks in the Panama Canal are impressive and give great insight into the workings of this fabulous piece of engineering. The site includes a small scale model of the Canal.

Portobelo: A picturesque, Spanish, colonial town and UNESCO World Heritage Site just along the coast from Colon, Portobelo is worth visiting for its pretty sea views.

The ruins of five Spanish forts and a Spanish, colonial treasure house the Aduana Real, which was restored in 1998.

In the 16th century, the Portobelo Treasure House was the holding place for Peruvian gold and loot that was seized in Latin America for shipment to Spain.

But be aware that Colon is a very dangerous city, and rarely on the tourist itinerary due to the risks of becoming the next victim. Walking around is not advisable.