Baklava The Rich Sweet Dessert Pastry You Should Not Miss 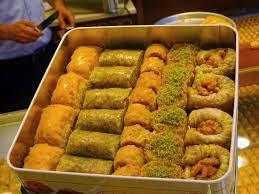 Baklava is a rich, sweet dessert pastry made of layers of filo filled with chopped nuts and sweetened and held together with syrup or honey.

It is characteristic of the cuisines of the Levant, the Caucasus, Balkans, Maghreb, and of Central and West Asia.

The word baklava is first attested in English in 1650, a borrowing from Ottoman Turkish. The name baklava is used in many languages with minor phonetic and spelling variations.

Baklava is normally prepared in large pans. Many layers of filo dough, separated with melted butter and vegetable oil, are laid in the pan.

A layer of chopped nuts typically walnuts or pistachios, but hazelnuts are also sometimes used, is placed on top, then more layers of filo.

Most recipes have multiple layers of filo and nuts, though some have only top and bottom pastry.

Before baking at 180 °C, 356 °F, 30 minutes, the dough is cut into regular pieces, often parallelograms or lozenge-shaped, triangles, diamonds or rectangles.

After baking, a syrup, which may include honey, rosewater, or orange flower water is poured over the cooked baklava and allowed to soak in.

In Turkey, baklava is traditionally made by filling between the layers of dough with pistachios, walnuts, almonds parts of the Aegean Region or a special preparation called kaymak - not to be confused with kaymak, the creamy dairy product.

In the Black Sea Region hazelnuts are commonly used as a filling for baklava.

The city of Gaziantep in southeast Turkey is famous for its pistachio baklava and it regards itself as the native city for this dish, though it only appears to have been introduced to Gaziantep from Damascus in 1871. 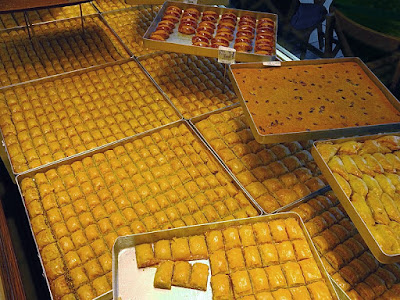 In many parts of Turkey, baklava is often topped with kaymak or, in the summer, ice cream or milk cream flavour, called kaymaklı dondurma.

In Greece, baklava is supposed to be made with 33 dough layers, referring to the years of Christ's life.

In Azerbaijan, Azerbaijani pakhlava is made with walnuts or almonds. It is usually cut in a rhombus shape. It is traditionally served during the spring holiday of Nowruz.

In Armenia, paklava is made with cinnamon and cloves.

In Iran, a drier version of baklava is cooked and presented in smaller diamond-shaped cuts flavored with rose water.

The cities of Yazd and Qazvin are famous for their baklava, which is widely distributed in Iran.

Persian baklava uses a combination of chopped almonds and pistachios spiced with cardamom and a rose water-scented syrup and is lighter than other Middle Eastern versions.

In the Maghreb, mainly Libya, Tunisia, Algeria and Morocco, the pastry was brought along many others by the Ottomans, and is prepared differently depending on the regions and cities.

In Bosnia and Herzegovina cuisine, the Ruzice is their variant of baklava.

In Crimean Tatar cuisine, the pakhlava is their variant of baklava.