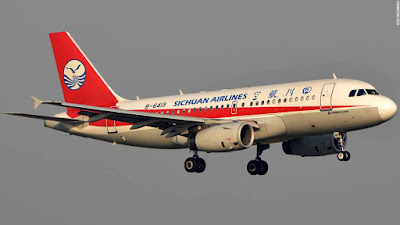 A Sichuan Airlines Airbus A319 flying from Chongqing to Lhasa was forced to make an emergency landing about 20 minutes after its right windshield cracked and shattered into the plane as it cruised at 33,000 feet, hitting and injuring the First Officer.

The windshield cracked suddenly and gave a huge bang. I looked aside and found half of the co-pilot’s body was already outside the window. Fortunately, his seat belt was fastened, he said.

The sudden loss of pressure and low temperature made me very uncomfortable and it was very difficult to make a single move when the aircraft was flying at 900 kilometers an hour and such a high altitude, the captain explained.

As the emergency unfolded, the Captain initiated an emergency descent and diverted to Chengdu.

According to him, he descended to 23,500ft, which was the minimum safe altitude in the area because of the tall mountains in the vicinity of the flight’s routing.

As the plane cleared the mountainous area, it descended to a more suitable 9,000ft, where oxygen levels are adequate for the human body.

The Southwest Regional Administration CAAC released a preliminary event bulletin, suggesting that the aircraft was en route at 9,800 meters at 0.74-0.75 match when the right-hand windshield developed cracks.

Even though the First Officer faced the harshest consequences, he only received minor injuries.

Following the windshield incident, the Flight Crew was unable to establish ATC communications because of the loud noise coming in from the wind speed bursting into the Flight Deck.

According to the bulletin, the Captain dialed the emergency code on the airplane’s transponder, signaling the airport to clear the runway for an imminent landing.

According to some witness passengers, oxygen masks were released and all Flight Attendants performed the emergency maneuvers flawlessly.

No windshield malfunctions had been recorded during the preceding 15 days.

The airline also has three A350s on order. The average fleet age is just of 5.6 years.

The Civil Aviation Administration of China said the Sichuan Airlines co-pilot was treated for scratches and a sprained wrist. A second crew member also suffered injuries to their waist, officials said.

The crew members are in good condition and after full rest, they will continue to perform the sacred duty of safe flight, the airline said.

Another 27 passengers sought assistance after the plane made an emergency landing in the Chinese city of Chengdu.

None of them appeared seriously hurt, the airline said, adding that it had arranged for special personnel to accompany the travelers.

The airline did not immediately comment about what led to the shattered windshield, but apologized and referred to the incident as mechanical failures.

We thank all passengers on this flight for their understanding and tolerance. The crew responded calmly and properly handled it in an emergency, Sichuan Airline said.

Flight 8633 left Chongqing, southwest of the Chinese capital of Beijing, just before 6:30 a.m. local time Monday (6:30 p.m. ET Sunday). It was scheduled to land in the Tibetan capital of Lhasa about two and a half hours later.

But just as flight attendants came down the aisles with breakfast carts, the plane was thrown into a commotion, passengers told local media.

Unknown to them, the pilot was trying to steer the aircraft with his co-pilot partially out of the windshield.

Every item in the cockpit was flying around. Most of the equipment was malfunctioning. And the noise was so great, the radio was inaudible, Liu said.

The entire aircraft was vibrating it was impossible to see the instruments and it was difficult to operate.

Chinese who learned of the successful landing heaped praise on Liu, a former military pilot, for his life saving maneuvers during a perilous situation.

The hashtag #ChinaHeroPilot was trending on the popular Chinese social media site Weibo.

I hope they make a movie to let more people know about Liu, one user wrote.

It took exquisite technical flying skill to turn the tide.

Witness the quality of Chinese pilots! another user posted, adding, But why did the window fall out? The aviation maintenance industry pays well, shouldn't there be some accountability?"

Incidents involving cracked windshields do happen on a regular basis due to bird and lightning strikes, but ones involving entire windshields coming off are rare.

In 1990, one of the pilots on British Airways Flight 5390 was blown partially out of the cabin window after its windshield burst open at 23,000 feet. He survived.

The National Transportation Safety Board, meanwhile, is investigating what caused an engine on Southwest Flight 1380 to explode on April 17, forcing the emergency landing in Philadelphia.

The incident is being investigated.