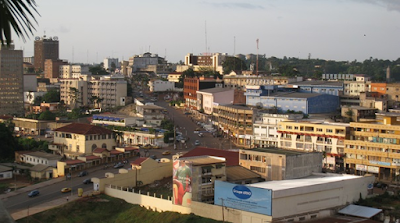 Yaounde is the capital of Cameroon with a population of approximately 2.5 million, the second largest city in the country after the port city Douala.

It lies in the Centre Region of the nation at an elevation of about 750 metres (2,500 ft) above sea level.

Most of Yaounde's economy is centered on the administrative structure of the civil service and the diplomatic services.

Due to these high-profile central structures, Yaounde enjoys a relative higher standard of living and security compared to the rest of Cameroon.

Local residents engage in urban agriculture. The city is estimated to have 50,000 pigs and over a million chickens.

In 2010, under Mayor Jean Claude Adjessa Melingui, Yaounde began a flood reduction project, the Yaounde City Sanitation Master Plan, to deal with severe floods that disrupted the city 15 to 20 times a year, affecting as many as 100,000 people at a time.

After four years, the frequency of flooding had been reduced from fifteen to three times a year, and cases of water-borne diseases such as typhoid and malaria were reduced by almost half.

Although Melingui died in 2013, local officials are continuing his efforts to transform the city.

Ongoing improvements to sanitation infrastructure are being carried out under a $152 million plan, largely financed by loans, primarily from the African Development Bank and the French Development Agency, slated for completion in 2017.

Despite the security issues and humanitarian crises that have plagued the Central African nation, its economy remains stable.

In fact, there is diversification of its productive economic activities, with the services sector contributing about half of the total domestic production.

However, just like many countries on the continent, Cameroon has been grappling with corruption, which dominates almost all the sectors, particularly in the capital city.

Oil, gas, and mining revenues are rarely reported, which implies massive graft. In addition, there is weak protection of real and intellectual property, and the judicial system is vulnerable to political manipulation.

According to Yaounde City Council data, there has been over 130 floods that have been striking the city from 1980 to 2014, causing massive loss of life and economic damage.

However, there has been reduction of flooding in the city since the establishment of a sanitation master plan to address the issue.

Another measure was to relocate people living along the drainage routes and in low-lying flood zones.

The city centre houses government offices, some hotels, and the central market. The Bastos district, with most homes owned by Cameroonians, is home to foreign embassies and the expatriate European, American and other continental communities drawn mainly from the diplomatic corps.

The presidential palace and compound is in the Etoudi district.

Also found in Yaounde are:

- The Cathedrale Notre Dame des Victoires, seat of the Archdiocese of Yaounde

- The Basilique Marie-Reine-des-Apotres, built on the site of the first missionary church in Cameroon

There is a small zoo in the Mvog-Betsi neighbourhood. Yaounde has a small assortment of Pubs, nightclubs and restaurants.

A distance outside Yaounde is the NGO Ape Action Africa, which rescues and rehabilitates Great Apes threatened with extinction by the illegal bushmeat and deforestation trades.

Yaoundé features a tropical wet and dry climate with constant temperatures throughout the year. However, primarily due to the altitude, temperatures are not quite as hot as one would expect for a city located near the equator.

However, there is a noticeable decrease in precipitation within the wet season, seen during the months of July and August, almost giving the city the appearance of having two separate rainy seasons.

It’s primarily due to the relative lull in precipitation during these two months that Yaounde features a tropical wet and dry climate, as opposed to a tropical monsoon climate.

Yaounde Nsimalen International Airport is a major civilian hub, while nearby Yaounde Airport is used by the military.

Train lines run west to the port city of Douala and north to N'Gaoundere. Many bus companies operate from the city; particularly in the Nsam and Mvan districts.

Frequent buses run on the road between Yaounde and Douala, which has witnessed several fatal accidents. Travel time by road between Douala and Yaounde is approximately 3 hours.

Traffic in the city can be heavy during weekdays, but is very light during the weekends. Yaounde has made significant progress in infrastructure, especially road construction.

Cameroon is a bilingual country, where English and French are both official languages.

Therefore in the city there is a coexistence of French educational system schools, where the degree giving access to university is the Baccalaureate.

All the education is in French, and the English educational system schools, where the degree giving access to university is the GCE Advanced level.

There is also one Turkish School, The Amity College/School.

The largest hospital is the Central Hospital of Yaounde - Hopital Central de Yaounde with 650 beds.

Yaounde General Hospital - Hopital General de Yaounde - HGY had 302 beds when it was built in 1985.

The national football team plays some of its home matches in the Ahmadou Ahidjo stadium and the football clubs Canon Yaounde, Impots FC and Tonnerre Yaounde are all based in the city.

Yaoundé is also the base for the National Institute of Youth and Sport (INJS); this school trains government workers who will be in charge of sport all across the country during their career. 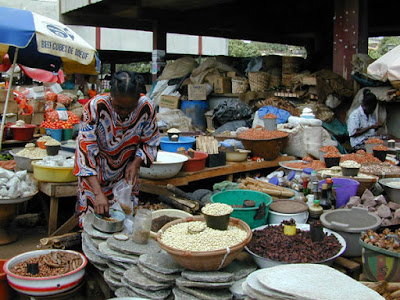 Yaounde Market
Joel Embiid, center for the Philadelphia 76ers, and Luc Mbah a Moute, a forward for the Houston Rockets are from Yaoundé, as are Breel Embolo, a footballer for Schalke 04 and Vincent Aboubakar, a footballer for Porto.

Flight schedules to Yaounde and Europe have been reduced in the past few years, and today (2018) there only direct flights to Paris, Brussels, and Istanbul.

Most flights to and from Europe first descend in Douala. These flights frequently continue on to Yaounde and do not require passengers to disembark.

Alternately, one could get off in Douala and take one of the numerous bus or train services to reach Yaounde, a 3-4 hour ride.

Trains are usually used to move cargo from the southern provinces to the northern provinces. There are passenger services that run daily from Yaounde to the Adamawa province.

It's really worth getting the prestige service if you're coming from Douala. If for no other reason than the seatbealts, it's worth the splurge, but take a jumper incase they crank the air-con.

City busses do exist, but shared taxis are the way to go. They will slow down for you to call your destination, and beep to say yes.

The price is fixed at 200CFA, unless you're travelling a long way, or if you're not going far, you can try calling cent francs and your destination.

The city's not really set up for tourists, but some fun things to see are the Mvog Betsi zoo for primates and lions, with a kids' playground, the Mokolo market which is very big and in-your-face, Mont Febe, or maybe the swimming pools of some of the hotels.

The city centre houses government offices, some hotels, and the central market. The Bastos neighbourhood, with most homes owned by Cameroonians.

It is home to foreign embassies and the expatriate European community drawn mainly from the diplomatic corps. The presidential palace and compound is in the Etoudi neighborhood.

Also found in Yaoundé are:

- The Cathedrale Notre Dame des Victoires, the seat of the Archdiocese of Yaounde

- Basilique Marie-Reine-des-Apotres, built on the site of the first missionary church in Cameroon

There is a small zoo in the Mvog-Betsi neighbourhood. Yaoundé has a small assortment of nightclubs and restaurants.

If you're volunteering with an NGO, make sure that you've verified its credibility with an independent source.

A good way can be to look at the NGO's partner organisations; if it has any big ones ie. UN etc., they will probably have checked it out.

It is sad to see eager and well intentioned volunteers have their time and money wasted and their benevolent zeal diminished.

If you need CFA, there are a handful of ATMs at banks around the city, as well as one in the Hilton in the center of Yaounde.

There are also many people on the street who will change money, e.g. at the airport, outside the Hilton, and at the Casino supermarket.

Money changers on the street can be recognized by seeing them rub their thumb and middle finger together at you not a rude gesture, just a sign.

They will generally accept Euros but some may also accept dollars. Know the conversion rate before you go in case you need to haggle, but the group of people who change money outside the Casino give a good rate without haggling

There is a Casino, a large French supermarket chain next to the Notre Dame cathedral in the center of town where you can buy typical European brand-name foods.

The presence of native restoration centers nearly at every turns with a local menu and the many accustomed may provide a unique experience if you care to stop by.

Street stalls are everywhere, but a nice place to go is Nlongkak round about. Here there's a bit of a variety, and plenty of places to get a beer.

A plate of beans should cost between 200-500CFA, an omlet around 500 or 1000 if in a restaurant with chips, and a plate of spagetti maybe 500CFA. Prices may vary considerably depending on the honesty of your vendor.

Cafe Yaounde, Hippodrome. Pricey for food. Seems to be catering to the expat crowd with a focus on European style cuisine. Nice ambiance with patio seating in a lush garden area. One of the best restaurants in Yaounde.

Kajazoma is a very chic art gallery/eatery that is defiantly worth checking out for dinner or for drinks. Located in a tranquil, open garden or Bastos.

Cosypool is a thai inspired restaurant with a lot of delicious options (Bastos).

Salsa the pizzas are amazing (Bastos).

Yaounde is well served by many mid-range hotels in and around the city-center.

Hotel La Falaise, CFA 55,000, is one of the best of the mid range. Nice rooms, with a pool and gym. Rooms either face the street or the courtyard where the pools is.

Courtyard rooms can be a problem if there is a party in one of the halls on the main and second floor which can sometimes go well into the early hours of the morning.

Street facing is better choice even if the sound of cars start quite early.

The restaurant is ok, but expensive. There are a few options around the hotel and a cheap cab ride away.

Taxi sharing can be risky, even for Cameroonians, and you may wind up with your cell phone and wallet stolen. It is recommended to hire a private taxi recommended by your hotel or a friend.

Yaounde, spread over 7 hills, is the capital city of Cameroon. It is in the southern part of the country.

The 20th-century Notre Dame des Victoires cathedral has a striking triangular roof. Nearby, in the Lake Quarter, the former presidential palace is home to the National Museum, with cultural exhibits such as masks and sculptures.

Farther west, Mvog-Betsi Zoo is home to primates rescued from the bushmeat trade.

South of the center, the Marie Reine des Apotres basilica was built on the site of one of Cameroon’s first missionary churches.

A few kilometers north of Yaounde, the Benedictine monastery on Mont Febe is home to the Musee d’Art Camerounais.

Its extensive collection includes masks, pottery and artifacts made of bronze and wood.