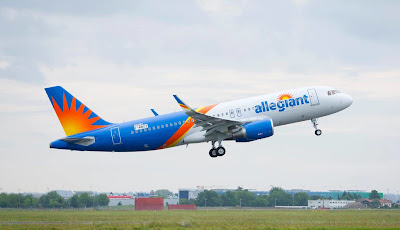 The airline is on its way to becoming an all-Airbus carrier, progressively replacing its older MD-80s with brand-new planes.

According to Airbus, this is the 69th aircraft that the Mobile assembly line has delivered since it opened in 2015.

Back in 2016, Allegiant placed an order for 12 Airbus A320ceo planes. The airline took delivery of its first A320 in May 2016, unveiling it at an event at Orlando Sanford International Airport (SFB).

This delivery is also an important step in our transition to an all-Airbus fleet, increasing efficiencies across our entire operation, remarked Maury Gallagher, CEO, and chairman, Allegiant.

According to the CEO, these planes will bring economic advantages in fuel savings and higher seat capacity.

The airline’s A319/A320 fleet averages 12.9 years, as most of these planes come from airlines like easyJet, Vueling, Aer Lingus, and CEBU Pacific Air.

The Airbus Final Assembly was the 69th jet delivered but the first one built in the country, Al.com reported. The low-fare carrier is based in Las Vegas that has routes connecting to cities including New Orleans, Jacksonville, Savannah, San Diego, Orlando, New York, Washington, D.C., Las Vegas, Los Angeles and Austin.


The company described its newest jet as “the 11th of 13 new A320 aircraft scheduled for purchase directly from Airbus, to be inducted into Allegiant’s fleet this year.”

The new jets had previously been built in Toulouse, France and Hamburg, Germany.

Allegiant has 99 Airbus jets in service or on order and plans to be flying an all-Airbus fleet by the end of the year.

“Today’s delivery is an exciting milestone for Allegiant and our ongoing commitment to providing access to affordable, safe and reliable air travel for many people who wouldn’t otherwise be able to fly,” said Maury Gallagher, CEO and chairman of Allegiant. “This delivery is also an important step in our transition to an all-Airbus fleet, increasing efficiencies across our entire operation, and bringing economic advantages in fuel savings, higher seat capacity and more.”

More than 380 Airbus representatives, executives from Airbus and Allegiant Air, a team of Allegiant employees gathered at the Airbus production facility in Mobile.

Lekites added: “We are proud to deliver Allegiant their first Airbus aircraft manufactured in Mobile, and we look forward to providing them more aircraft that exceed customer expectations.”

It has been about a month since the last earnings report for Allegiant Travel Company ALGT . Shares have added about 5% in that time frame.

Will the recent positive trend continue leading up to its next earnings release, or is ALGT due for a pullback? Before we dive into how investors and analysts have reacted as of late, let's take a quick look at its most recent earnings report in order to get a better handle on the important catalysts.

Allegiant's first-quarter earnings of $3.42 per share surpassed the Zacks Consensus Estimate of $3.00. Also, the bottom line improved significantly on a year-over-year basis. Results were aided by the strong demand for air travel.

Quarterly revenues increased in double-digits year over year to $425.4 million, marginally above the Zacks Consensus Estimate of $425.1 million. Moreover, the top line was boosted primarily by a significant increase (14.1%) in passenger revenues.

TRASM in the quarter is expected to decrease by two percentage points driven by Easter, falling partly in the first quarter this time. High demand for air travel during Easter generates more passenger revenues and in turn, boosts unit revenues. Additionally, scheduled and system ASMs are anticipated to increase between 10% and 14%.

The company expects fuel cost per gallon of $$2.20 for the full year. The previous forecast for the metric was $2.17 per gallon. Additionally, effective tax rate is now anticipated between 21% and 22%. Earlier, the metric was estimated at 24-25%. This upside is owing to dissolution of foreign subsidiaries leading to adjustment of deferred tax balance. Capital expenditures are now projected at $300 million, higher than the earlier predicted $290 million.

The company continues to expect earnings per share in the band of $10-$12 for the current year. System capacity is likely to increase between 11% and 15%, unchanged from its past guidance.

It turns out, fresh estimates have trended downward during the past month. There have been five revisions lower for the current quarter. Last month, the consensus estimate has shifted downward by 12.2% due to these changes.

At this time, ALGT has a nice Growth Score of B, however its Momentum is doing a bit better with an A. Following the exact same course, the stock was also allocated a grade of A on the value side, putting it in the top 20% for this investment strategy.

Overall, the stock has an aggregate VGM Score of A. If you aren't focused on one strategy, this score is the one you should be interested in.

Based on our scores, the stock is equally suitable for value and momentum investors than growth investors.

Estimates have been broadly trending downward for the stock and the magnitude of these revisions indicates a downward shift. Notably, ALGT has a Zacks Rank #3 (Hold). We expect an in-line return from the stock in the next few months.