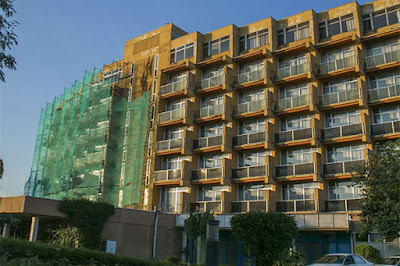 Marasa Africa, a subsidiary of the Madhvani Group, has started rehabilitation of 100-room Marasa Umubano Hotel in Kigali.

The first phase of the project will cost over Rwf8.5 billion ($10 million), and is expected to be completed after six months.

We plan to complete the entire façade renovation except the ground in the next six months.

The refurbishment will happen sequentially and in a very systematic way, which will help us to operate the hotel and as well carry out the renovations, said Parasuramn Eswar, director of corporate affairs at Madhivani Group.

Marasa Africa bought Umubano Hotel on April 1, 2017 from the government of Rwanda at $20 million after it was reposed from Libyan government, which owned majority stake in the hotel but failed to renovate it for years.

Officials who closely followed the liquidation process of Umubano Hotel after the time Libyans were kicked out of the business say the value of the hotel was $49 million, but government settled for less.

TripAdvisor the largest travel site at one time said: besides the need to paint outside walls of the hotel, the façade and the curtains are greying behind old windows and soviet style concrete balconies.

Tour operators are optimistic that the strategic location of Marasa Hotel, near Kigali Convention Centre its site in Kacyiru will help the new investor attract clients.

The ongoing major facelift will lift Marasa Umubano’s standing on the market.

According to Rwanda Convention Bureau, a government arm promoting events and tourism, last year, over 169 conferences attended by 28,306 international delegates were hosted.

Officials at the bureau said the outlook of the conference tourism remains positive.

This year, they bureau projects that at least 123 conferences will be hosted, each with 500 delegates who will generate at least Rwf63 billion ($74 million).

The growing supply in hotel rooms in Rwanda has resulted in price wars, especially by new entrants on the market to attract clients, a development he said is not sustainable.

Mr Eswar said during the first phase, the front façade outer side of the hotel is to be refurbished.

This is to address the element of elegance to the strong edifice with a new drop off canopy at entrance, vertical wooden fins in the balconies at all floors, said Mr Eswar.

Uganda's Madhvani Group has acquired the Umubano Hotel in Kigali, Rwanda for $20 million.

The East African nation had been seeking an investor to acquire the property for the past four years. The Libyan government, which owned the majority stake in the hotel, failed to renovate it.

Parasuramn Eswar, corporate affairs director at the Madhvani Group, said that the company now owns the hotel outright, and will oversee renovation.

Company officials are currently doing due diligence ahead of the full take-over next month.

This could be a smart move: According to the Rwanda Development Board, tourist arrivals in the country have increased from 1.26 million in 2014 to 1.3 million in 2015.

This led to a surge in the earnings from $305 million to $318 million during the same period.