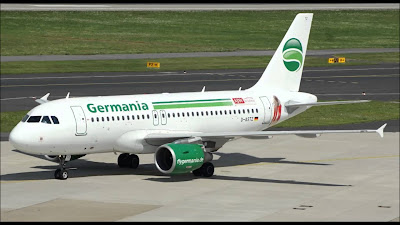 Germania has commenced its first services to the French island of Corsica during the last seven days.

Weekly flights (Saturdays) from Dresden (DRS) and Nuremberg (NUE) were started to Bastia (BIA), the second busiest airport on the island after Ajaccio.

The 1,007-kilometre sector from the former airport will be flown by the airline’s 737-700s, while the service from the latter facility will be operated by a mix of Germania’s A320 family.

Both routes were launched on 19 May and neither faces any direct competition.

The capital city of the state of Saxony became a new destination in the Russian airport’s route network and the seventh German city with direct scheduled service.

The LCC operates the city pair twice-weekly with its 737-700 fleet, leaving from the German city on Thursdays and Sundays and the return flights departing Russia on Fridays and Mondays.

In addition to Dresden, St. Petersburg offers direct connections to such German cities as Berlin Schonefeld and Tegel airports by Rossiya Airlines and S7 Airlines respectively.

Hamburg and Dusseldorf by Rossiya, Munich by Rossiya and Lufthansa.

Frankfurt by Lufthansa and Ural Airlines and Cologne Bonn by Pobeda. There is no direct competition on this sector.

Germania now serves the Vienna (VIE) to Rostock (RLG) route twice-weekly (Fridays and Sundays) from 26 May.

We are pleased to welcome a new airline at Vienna Airport, namely Germania.

The new route to Rostock makes it even easier for passengers to reach the northern part of Germany, says Julian Jager, Member of the Management Board of Vienna Airport.

The route faces no direct competition. The day before, the airline began weekly (Thursdays) rotations between Hamburg (HAM) and Varna (VAR).

Flown by Germania’s A319 fleet, the city pair will encounter resistance from incumbent SunExpress Germany, which also flies the route on a weekly basis.

The last of the trio of new routes commenced by the airline on 23 May was the addition of another route from its recently opened Palma de Mallorca (PMI) base.

Germania added a twice-weekly (Tuesdays and Fridays) service to Montpellier (MPL) on 23 May. Operated by the carrier’s 737-700 fleet, the 459-kilometre sector will face no direct competition.

The 2,617-kilometre sector will be flown by Germania’s A319 fleet. By contrast, its twice-weekly (Mondays and Thursdays) operation from Nuremberg (NUE) to Athens (ATH), will be flown on its 737-700s. Neither route faces any direct competition.

Germania has based a second aircraft at Berlin Schonefeld (SXF), and is using the fresh capacity to re-start weekly services (Fridays) to Sharm El Sheikh (SSH), thereby reviving a route between the German capital and the Red Sea resort that has not been available for four-and-a-half years.

The following day the carrier also began services to Fuerteventura (FUE), a route that will operate on a twice-weekly basis (Tuesdays and Saturdays).

Unlike the Egyptian sector, the Spanish city pair will see direct competition from Ryanair (twice-weekly) and Condor (weekly).

Both routes will be flown by the carrier’s 737-700 fleet. Additional new features in Germania’s winter flight schedule from Schönefeld include increased capacity to Hurghada and a new route to Gran Canaria which launches next week.

The airline is committed to a policy for growth at this base, as well as Berlin Tegel.

Germania will achieve 400% growth in Berlin, commented Clauspeter Schwarz, Germania’s COO. This is our response to market changes and a greater presence in the capital.

Engelbert Lütke Daldrup, CEO of Berlin Brandenburg said: We are very pleased with the increased commitment of Germania to Berlin.

The wider range of flight offerings, the development of its bases at our two locations, as well as the maintenance operations at Schonefeld make the airline a key partner for us.”