UGANDA: Resurrecting Uganda Airlines After 15 Years, As Other African Airlines Are Limping Or Dead 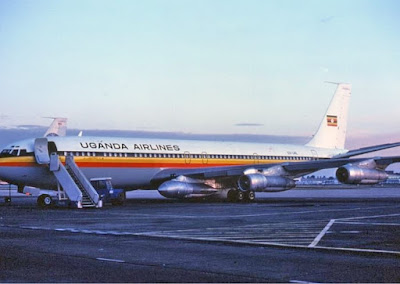 Monica Azuba Ntege, the minister for Works said that the government was concluding export finance negotiations for four Canadair Regional Jets 900 series (CRJ-900) that will form the backbone of an eventual fleet of six aircraft.

According to Works and Transport minister Eng Monica Ntege Azuba the four aircraft of Bombardier will have 80-100 passenger chauffeur capacity.

The aircraft will arrive and start flying by December, she said.

We’re starting with four aircrafts and these are Bombardier aircraft. The sitting capacity is 80 to 100 passengers.

They are Manufactured by Bombardier which is a Canadian company.

We had a team and it has done studies and a business plan was made,it was found that it would be viable.

What I have to tell you is that when you’re in the airline business, you don’t plan on making profits as soon as you you start. So according to the business plan we’ll break even after 4-5 years Minister Azuba empasized.

According to Azuba, government will later purchase two Airbus A330 series 800 wide twin engine propeller aircraft. These will have a 300 sitting capacity each.

She said government has already paid a commitment fee of $1.2 million to the Canada-based Bombardier manufacturer and France-based Airbus manufacturer.

Azuba said government has done a feasibility study and business plan indicating that revamping Uganda Airlines, which was grounded in 2002, will be a viable venture.

Azuba said government is cognisant of the fact that they won't make profits in the airline business from the first day.

She said government will be innovative after venturing into the airline business by looking beyond passengers and cargo transport.

We have made some deposits on the aircraft and we are negotiating export finance for them with Canadian financiers.

We expect that source to fund 70-80 per cent of the value of that acquisition while we fund the remainder from other sources, she said.

Parallel negotiations, although of lesser urgency, are ongoing with a consortium of Germany, French and British banks to advance export credit for a pair of Airbus A330-800 series that will form the core of the long distance fleet.

Ms Azuba said that the government was exploring a mix of finance options and could borrow from other sources in the interim to bridge any funding gaps.

The Minister said that $1.2 million has so far been paid in commitment fees to Bombardier and European aircraft maker Airbus.

But she did not reveal the total asset cost but said $400,000 had been deposited on each of the Airbuses while $100,000 apiece had been paid for each of the CRJs.

Another Ush129 billion ($3.5 million) has been committed to the project in the budget for fiscal 2018/19 that starts on July 1, 2018, to fund other aspects of related procurement.

The CRJs which will be used to develop a regional feeder network for intercontinental flights are expected to arrive in time for a November-December launch while the A330s will join the fleet in December 2020.

Breakeven is projected at four years at the earliest and five years in the extreme.

Azuba however, said that sustainability rather than profitability was the primary concern and the government was looking at how to help the carrier consolidate its revenue sources.

She hinted at a possible shakeup of several aspects of Entebbe International Airport saying the national carrier could earn ancillary revenue from ground handling, catering and inflight services.

We are looking at this as economic infrastructure, so its profitability should also be looked at in the broader context of its potential for multiplier effects on sectors such as tourism and the cost of moving into and out of Uganda by air, she says.

She declined to discuss details of the route structure but a business plan and management structure have been completed and key positions would soon be advertised.

A new board will also be constituted for the airline.

We have about six key positions. The current project team will drive the project up to launch but those who have the qualifications set out in the job description will be eligible to apply and join the team.

Uganda liquidated its former debt ridden national carrier in 2000 and the operator code QU was sold to a private carrier – East African Airlines- that folded in 2003.

Minister Azuba said that the airline will be fully owned by government but will later sell shares to release the pressure from the national coffers.

Officials have not revealed any details about the revamped carrier’s branding, liverly nor routes the airline will fly two.