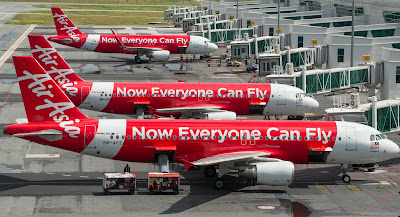 India’s Central Bureau of Investigation registered a case on Tuesday against more than ten major officials of AirAsia Group in India, Malaysia, and Singapore, who, according to authorities, collaborated with civil aviation officials to expedite the approval process and change aviation policies to suit the company.

The case report characterized the actions by the airline group as a criminal conduct.

Authorities on Tuesday conducted simultaneous raids at five offices of AirAsia India, which, according to a CBI statement, led to recovery of certain documents into which an investigation continues.

The CBI said the criminal conspiracy amounted to an attempt to amend/remove the then existing 5/20 rule in 2013 that restricted startups domestic flying for at least five years with a minimum of 20 aircraft before flying international routes.

Regulators amended the rule by removing the five-year caveat while retaining the required minimum of 20 aircraft.

The CBI report refers to lobbying agents who won contracts from AirAsia for favors as a quid pro quo.

Information has further revealed that indirectly the entire operation of AirAsia lndia was controlled by parent company AirAsia Berhad, by overriding the Board of Directors of AirAsia lndia, said the report.

A so-called brand license agreement allegedly resulted in day-to-day control by AirAsia Group of Malaysia over AirAsia lndia, which at the time violated guidelines of India’s Foreign Investment Promotion Board.

It has evolved from an anti-corruption agency to a multi-faceted, central police law enforcement agency with a legal mandate to investigate and prosecute offenses anywhere in India.

AirAsia India operates as a joint venture between Tata Sons and Malaysia-based AirAsia, with a small stake held by two individuals.

A statement from Shuva Mandal, director of AirAsia India, denied any wrongdoing by the company and noted its cooperation with all regulators and agencies to present the correct facts.

The Central Bureau of Investigation (CBI) filed a case on Tuesday against AirAsia (India), AirAsia Berhad, and its top executives, including group chief executive officer (CEO) Tony Fernandes, for allegedly entering into a criminal conspiracy with the UPA government to change rules to get overseas flying rights.

The conspiracy, it’s alleged, was hatched just a month before the 2014 Lok Sabha Elections.

The case is based, among other findings, on a clutch of internal emails between senior executives of AirAsia and the Tata Group.

One such email with the CBI is that of top Tata Trusts executive Venkataramanan Ramachandran, who is named in the FIR, allegedly giving personal assurances from then civil aviation minister Ajit Singh.

It also conveys an assurance from the head of the Foreign Investment Promotion Board (FIPB) to go ahead with investment plans even when they were challenged in court as early as October 2013.

Met Mr Ajit Singh a short while ago. He said approvals should come soon and that our planning should be on the basis of the 5/20 rule getting scrapped, reads the email by Venkat to top AirAsia executive Tharumalingam Kanagalingam, who is also named in the CBI FIR.

AirAsia India Limited (AAIL) refutes any wrongdoing and is cooperating with all regulators and agencies to present the correct facts.

In November 2016, AAIL had initiated criminal charges against its ex-CEO and had also commenced civil proceedings in Bengaluru for such irregularities.

Venkat’s email further states: “Met the chairman of FIPB today. He said they are going to strongly defend the policy in the courts next week and they have filed affidavits to that effect. The same is repeated by the ministry of commerce today.”

Venkat is the managing trustee of the Sir Dorabji Tata Trust and is responsible for management and oversight of all the Tata Trusts.

Tata Sons and AirAsia Berhad own 49% each in AAIL while Venkat and former TCS CEO S Ramadorai hold 1.5% and 0.5%, respectively, in the airline.

In its FIR, the CBI has alleged that bribes were paid for securing a permit for international operations by removing or amending the 5/20 rule – which restricted any airline with less than 5 years of experience and 20 aircraft from flying overseas.

A total of nine individuals, including corporate lobbyist Deepak Talwar, have been booked by the CBI along with unknown government officials serving during the UPA-II regime, officials of the civil aviation ministry and others.

Public servants of the now-disbanded foreign investment promotion board (FIPB) have also been booked on charges of corruption and criminal conspiracy.

Apart from CEO Fernandes, directors of AirAsia Group, Malaysia, have also been named.

According to the agency, a secret Cabinet note was sent on February 27, 2014 to the Cabinet to amend/remove the existing 5/20 rule for operation of international schedule in civil aviation.

Further, the civil aviation ministry had sent clarification in the form of supplementary note on March 5, 2014 to the Cabinet.

The proposal at that time, however, could not be approved since the Election Commission had announced Lok Sabha General Elections on March 5, 2014, reads the agency’s FIR.

Indicating that these lobbying attempts extended until 2016, the FIR states: During 2015-16, AirAsia remitted about Rs 12.28 crore to M/s HNR Trading Ltd, Singapore (co-accused) for a sham contract on the basis of a bogus agreement on plain papers, which was utilised for paying bribe to unknown public servants of Indian government and others for securing permit for operation of international scheduled air transport services.

Talwar, already wanted in criminal cases by probe agencies, is said to have made a presentation on a strategy to target government officials for which he was apparently paid Rs 17 lakh, the FIR mentions.

The purpose, according to CBI, was to fulfill Fernandes’ aim to have the airline venture to be able to fly internationally from day one.

To facilitate this, Rajender Dubey played a role of a liaison agent and was instrumental in seeking appointments and facilitating meetings for officials of AAIL with various Indian government officials for clearance of formalities, the FIR says.

It added that Fernandes and Kanagalingam intentionally chose to beat the legal framework and policies of the aviation sector.

The CBI has alleged that Fernandes employed Sunil Kapur, owner of M/s Travel/Total Food Services as a lobbying agent by awarding an on-board catering contract as a quid pro quo without any negotiation.

Elaborating on the FIPB violations, the FIR states that AirAsia Group of Malaysia was indirectly allowed day-to-day control over M/s AirAsia (India) Ltd through a brand licence agreement, which was a violation of the then guidelines of FIPB as only 49% FDI was allowed in aviation sector.

Searches were carried out by the agency at six locations including Delhi, Mumbai, Gurgaon and Bengaluru.

AirAsia India, the budget airline part-owned by Malaysian tycoon Tony Fernandes, has hit out at allegations that it bribed Indian officials in an attempt to change the country’s strict aviation rules.

Shuval Mandal, a director at the airline, said his company“refutes any wrongdoing, after Indian criminal investigators accused Mr Fernandes and his associates of being part of a criminal conspiracy that involved secretly hiring lobbyists and bribing civil servants.

Mr Mandal added: The company is co-operating with all regulators and agencies to present the correct facts.

In November, 2016, AirAsia India had initiated criminal charges against its ex-CEO and had also commenced civil proceedings in Bangalore for such irregularities. We hope to bring early resolution to all such issues.”

Mr Fernandes’s AirAsia joined forces with India’s Tata group in 2013 to form AirAsia India, a budget carrier in which each held 49 per cent.

Under Indian rules, the airline should have been run by the Indian conglomerate, but a report published by India’s Central Bureau of Investigation and citing reliable source information has alleged that Mr Fernandes was actually in control.

The report also accused the company of setting up a $1.8m fund to pay lobbyists and unknown public officials in an attempt to get the government to drop a law that airlines could only fly internationally if they had been operating for five years and owned 20 aircraft.

That requirement to have been running for five years was scrapped in 2016, though companies still have to own 20 aeroplanes before flying internationally. AirAsia India has said it hopes to meet this requirement by the end of this year.

Mr Tony Fernandes wanted the airline venture to be able to fly internationally from day one, the report said. “

Source information has further disclosed that unknown public servants…entered into a criminal conspiracy to expedite the approval process and change in aviation policies to suit the company.

It went on to say that an AirAsia employee handed over a closed packet containing Rs5m ($74,000) to a man call Mr Sriram in the coffee shop of an upmarket Mumbai hotel to facilitate the removal of the 5/20 rule.

It did not say who Mr Sriram is.

AirAsia India is already under investigation by India’s Enforcement Directorate for alleged questionable payments worth Rs223m.

That allegation, about which little has been made public and to which AirAsia India has not responded, was at the centre of a dramatic boardroom row between Tata Sons and its former chairman Cyrus Mistry.

Mr Mistry was dismissed as chairman in 2016, and subsequently said he wanted to expose alleged ethical and governance breaches at India’s largest conglomerate, including the payments made by its joint venture with Mr Fernandes’ company.

Shares in AirAsia fell more than 7 per cent on Wednesday in Malaysia.