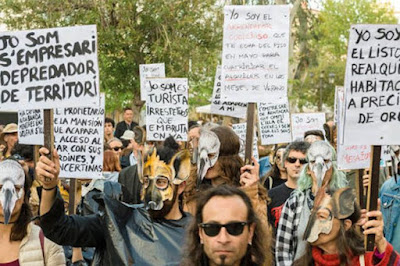 Hundreds of locals took to the streets of Ibiza to protest against what they say is unlimited, disrespectful and excessive tourism.

The protest was organized by Prou! and took place on Friday with more than 500 people gathering in the Ibiza Town's main square, Vara del Rey.

According to Diario De Ibiza, this was the first mass protest held in Ibiza against the excess of tourism.

Locals are outraged by the exorbitant growth of tourism that has taken place in recent history.

Noise pollution and the privatisation of beaches remain a major concern for residents.

The director of Prou!, Àngels Escandell, attended the protest and read the group's manifesto:

We can not continue living exclusively from tourism. It is not that we challenge toursim, but we do challenge that it is unlimited, disrespectful and excessive.

They keep telling us again and again that we live from tourism, but we don't live well we live badly.

We can't call living having to endure the plague of uncontrolled tourism that periodically assaults our island, that initiates the season of deafening music, that brings the psychopaths driving luxury cars and the never-ending traffic jams.

Prou! goes on to describe how tourism is damaging the local culture:

We have created a monster that has devoured our language and our culture, as well as natural resources and the landscape, devastated for the benefit of a few by mammoth buildings and disproportionate highways.

The manifesto continues: The exorbitant prices of accommodation have forced us to substitute a specialized workforce, doctors, teachers and policemen for DJs and music promoters.

Just last month, the council in San Antonio passed a law declaring that clubs and bars in West End will now be forced to shut down by 3AM.

It remains to be seen how this new law and curfew will effect the San Antonio club scene.

Ibiza is an island in the Mediterranean Sea off the east coast of Spain. It is 150 kilometres (93 miles) from the city of Valencia.

It is the third largest of the Balearic Islands, an autonomous community of Spain. Its largest settlements are Ibiza Town or Vila d'Eivissa, or simply Vila, Santa Eularia des Riu, and Sant Antoni de Portmany.

Ibiza has become well known for its association with nightlife, electronic music that originated on the island, and for the summer club scene, all of which attract large numbers of tourists drawn to that type of holiday.

Several years before 2010, the island's government and the Spanish Tourist Office had been working to promote more family-oriented tourism, with the police closing down clubs that played music at late night hours, but by 2010 this policy was reversed. Around 2015 it was resumed.

Ibiza is a UNESCO World Heritage Site. Ibiza and the nearby island of Formentera to its south are called the Pine Islands, or Pityuses.

Ibiza is considered to be a popular tourist destination, especially due to its legendary and at times riotous nightclub based nightlife centred on two areas.

Ibiza Town, the island's capital on the southern shore and Sant Antoni to the West.

Night life in Ibiza has undergone several changes since the island's opening to international tourism in the late 1950s.

Origins of today's club culture may be traced back to the hippie gatherings held during the 1960s and 1970s.

During these, people of various nationalities sharing the hippie ethos would regroup, talk, play music and occasionally take drugs.

These would most often happen on beaches during the day, with nude bathing a common sight, and in rented fincas in the evenings or at nights.

Apart from this confidential scene, which nevertheless attracted many foreigners to the island, local venues during the 1960s consisted mostly of bars, which would be the meeting points for Ibicencos, ex-pats, seafarers and tourists alike.

The Estrella bar on the port and La Tierra in the old city of Eivissa were favourites.

During the 1970s, a decade that saw the emergence of the contemporary nightclub, several places opened and made a lasting impact on Ibiza's nightlife.

The hippie ethos served as a common factor that infused all these venues and catalyzed the experience of a certain kind of freedom, accentuated by the holiday nature of most of the stays on the White Island.

During the 1980s, the music played in these clubs gained in reputation and became known as Balearic beat, a precursor of the British acid house scene.

As rave parties blossomed all over Europe, a DJ-driven club culture took hold of Ibizenca nightlife. It was the time when Space opened, thanks to Pepe Rosello, which found a niche in the after-hour parties.

Basically, the club would close at 6 AM and open again at 7 AM, when all the other clubs were still closed, enabling party-goers to flock from the other clubs to Space and continue dancing in broad daylight.

At the end of the 1990s, the after-hour parties held firm root on the island. In 1999, the Circoloco parties made their debut at DC10, with some of the original elements of Ibiza nightlife at the forefront.

Nowadays, during the summer, top producers and DJs in dance music come to the island and play at the various clubs, in between touring to other international destinations.

Some of the most famous DJs run their own weekly nights around the island. Many of these DJs use Ibiza as an outlet for presenting new songs within the house, trance and techno genres of electronic dance music.

The island has achieved renowned worldwide fame as a cultural centre for house and trance in particular, with its name often being used as a partial metonym for the particular flavour of electronic music originating there, much like Goa in India.

Since 2005, the live music event Ibiza Rocks has helped to redefine the Ibiza party landscape. Bands such as Arctic Monkeys, Kasabian, The Prodigy, and the Kaiser Chiefs have played in the courtyard of the Ibiza Rocks Hotel.

The season traditionally begins at the start of June with Space and DC10's opening parties and finishes on the first weekend of October with the Closing Parties.

Due to Ibiza's notable tolerance toward misbehaviour from young adult tourists, it has acquired the sobriquet Gomorrah of the Med.

Also well-known is Cafe del Mar, a long-standing bar where many tourists traditionally view the sunset made famous by Jose Padilla, who has released more than a dozen eponymous album compilations of ambient music played at the location.

That and other bars nearby have become an increasingly popular venue for club pre-parties after sunset, hosting popular DJ performers.

The island's government is trying to encourage a more cultured and quieter tourism scene, passing rules including the closing of all nightclubs by 6 a.m. at the latest, and requiring all new hotels to be 5-star.

The administration wants to attract a more international mixture of tourists.