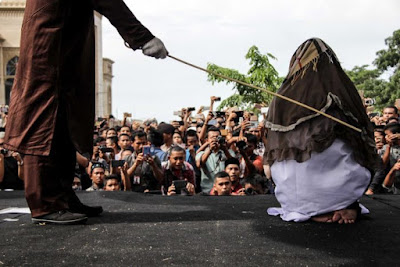 A group of sexy couples and alleged sex workers were publicly whipped for breaking Islamic law in Indonesia's Aceh Friday (Apr 20), just a week after the province pledged to move the widely condemned practice indoors.

More than a thousand people, including dozens of tourists from neighbouring Malaysia, jeered and screamed abuse at the group as they were flogged outside a mosque in the capital Banda Aceh.

The three men and five women who included several college students were found guilty of violating religious law by either showing affection in public or for offering sexual services online, officials said.

Aceh is the only province in the world's most populous Muslim majority country that imposes Islamic law and flogging is a common punishment for a range of offences from gambling, to drinking alcohol to having gay sex or relations outside of marriage.

The conservative region on the northern tip of Sumatra island passed a regulation a week ago that would see criminals whipped only behind prison walls. It was not clear when the new rule would come into effect.

The move was in response to a wave of international criticism over the practice, which has included flogging members of the region's LGBT community and, in some cases, non-Muslims.

Rights groups have derided it as cruel and last year President Joko Widodo called for an end to public whippings in Aceh.

Around 98 per cent of the province's five million residents are Muslims, subject to religious law, including the public whippings which came into practice around 2005.

The new rule has generated protests from conservative groups who see public whippings as having a strong deterrent effect on crime.

Banda Aceh's deputy mayor Zainal Arifin said Friday's flogging was not an act of defiance against the new rules.

We understand that the regulation has not yet come into effect and the prison is not yet ready to host floggings so that is why we are still doing it in public, he said.

Until the new regulation is officially in place we will carry on as usual.

The decision of the Aceh Provincial Government in Indonesia to move flogging from public into more closed spaces has drawn resistance from the public and the local parliament.

On April 12, Aceh's governor Irwandi Yusuf signed a new rule to ban the whipping of criminals in public.

Under the new rules, it is forbidden to record people being caned with a rattan stick, crowds often film the spectacle on smartphones and only journalists and adults can witness the punishment inside private prisons.

But members of a controversial group, Islamic Defender Front (FPI), staged a public protest in front of the governor's office over the weekend the protest turned violent and several people were arrested by the police.

The local head of Islamic Defender Front, Muslim at-Tahiry, said he opposed the decision to move caning away from the public eye.

Based on Islamic law, the whip should be done in public, witnessed by the believers, he said.

That is to be a lesson for the perpetrators and the people who watch it. So they really should be embarrassed. This works as a deterrent.

The local parliament has also rejected the new rule and filed a complaint to the Supreme Court in Jakarta.

A special session of Aceh's parliament has officially decided that parliament will take legal action against the governor's decision and we will ask that the regulation be revoked, MP Azhari Cage said.

Mr Cage added that the parliament also questioned the reasoning of the Aceh Provincial Government in linking public canings with startling investors and slow-down in investment in the province.

The reason is for children to not see the flogging.

Since the law has been in force, no society or investors have protested, he said.

We agree that investment in Aceh should be improved but it is related to government and community support, the availability of things like electricity. This has nothing to do with the flogging.

The Qanun does require whipping in a public place, but by moving to the more closed place like in prison in my opinion does not limit public access, he said.

The reason is for children to not see the flogging, which I think is good from psychology point of view. 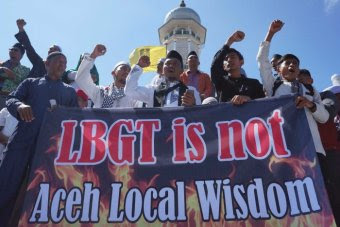 Flogging can be used as punishment in Aceh from crimes against Sharia law, such as engaging in gay sex.

In his press statement after signing the new law, Mr Yusuf maintained that its primary aim was to prevent children witnessing the flogging.

This is not reducing the punishment, I just want to make sure the implementation of the punishment is not being attended by children, he said.

But society is not forbidden from witnessing the flogging.

He admitted the punishment often triggered criticism internationally and the rule revision was necessary to curb this outside protest.

In order for investors not to be worry about investing in Aceh, this can also help to increase economic growth, Mr Yusuf said.