UAE: Sharjah Family Honours Indian Maid Who Worked For Them For 27 Years With Gifts 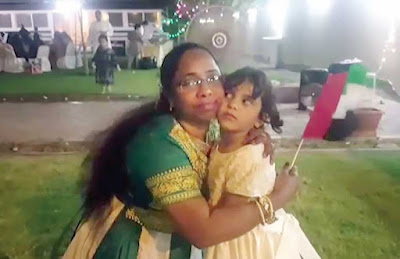 Sharjah Emirati family offered an Indian maid, who served them for 27 years, with gifts and a grand farewell party to honour her, after she decided to leave for her home country.

One of the extended family members Mohammed Rashid Al Ali, said that Lakshmi, from Andhra Pradesh, a South Indian state, worked with them all these years and was treated as part of their family.

All the children and grandchildren considered her their mother, as she raised them like her own in a loving and caring way.

They knew the parting would create a vacuum in their hearts and Lakshmi's send-off was marked with sobs and tears.

But the family is happy for her as she returned to her country after so many years.

Lakshmi, overwhelmed by emotions at the farewell, said: I have never been treated as a maid in this house but as a family member. They always bought me gifts, clothes and jewellery and supported my family in India financially.

It is difficult to leave the children, but I'm getting old and it is time to go home. I will miss them all.

For the farewell, the family's four villas were decorated elaborately, and all the extended family members and their other staff were brought together for the surprise party.

They kept the preparations a secret and on the day of the send-off, they presented Lakshmi new outfits, pampered her at the beauty salon and brought her to the villa, where there was a cake and a feast ready.

They even had a banner made with her name on it.

The farewell party was attended by all the children and grandchildren she raised, and other family members.

Our gifts are a mark of appreciation for the love she bestowed on us. I thank Lakshmi from the bottom of my heart for raising two generations of 20 children and grandchildren, Ali said.

Treat others just as you would like to be treated, with respect and dignity.

Every job has its worth, every person doing deserves to be treated honourably.

Wealth may get you to a station in life, but the respect you accord to other humans elevates you as a human.

This family made an outsider, a maid one of their own.

There was love. It changed their lives and hers.

It was a wonderful gesture from the heart!

You can prove yourself to be best in whatever you do. What job you do doesn't matter. I think she has proved this.

Many thanks to the great Emirati family who recognized her great work.

The gratitude and kindness of the Emirati family displays values and respect for each individual who are associated with them. GOD BLESS them abundantly.

I am really moved by the gesture of the Emirati family, that showed the whole world that real love and affection is above all religion, country,language, status and proved we are all human.

Finding words is difficult to appreciate.