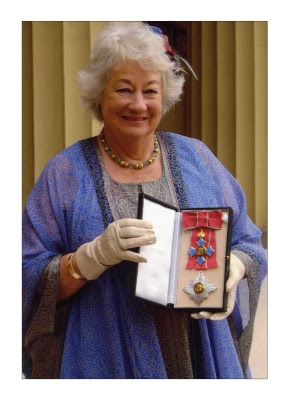 Conservation icon Daphne Sheldrick has passed on. According to a Facebook post by The David Sheldrick Wildlife Trust, Daphne passed away the evening of April 12 after a long battle with breast cancer.

It is all very raw but I must share with you the passing of my incredible mother Daphne Sheldrick.

What an example she was to us all, and I feel blessed to have been able to call her my Mum because she was quite simply ‘one of a kind’. She was a national treasure and a conservation icon.

Daphne passed away the evening of the 12th April after a long battle with breast cancer, a battle she finally lost.

Her legacy is immeasurable and her passing will reverberate far and wide because the difference she has made for conservation in Kenya is unparalleled.

She will be sorely missed but never forgotten, and this is what Daphne drew the most comfort from in her final weeks.

Knowing that her memory and work would continue with the tiny steps of baby elephants for generations to come and that the work that she pioneered has been able to achieve so much for wildlife and wild places throughout Kenya.

She died knowing that she will continue to make a difference each and every day upon a land that she held so dear to her heart through the work of The David Sheldrick Wildlife Trust, thanks to a dedicated team she leaves behind.

Daphne was fortunate to live long enough to preside over mud baths at Ithumba with well over 100 orphans, ex-orphans and wild friends frolicking, and be able to say to herself, ‘but for I’.

What a gift she leaves us all with, as she really is a shining example of the finest of humanity. Thank you all for your love and passion and support.

Angela Sheldrick Daphne dedicated over 60 years of her life to the protection of Africa’s wildlife and some of the world’s most iconic and threatened animals.

Born in Kenya in 1934, Daphne spent close to 30 years of her life working alongside her husband David, the founder warden of Kenya’s largest National Park, Tsavo East, as they forged this unforgiving wild land into a protected space for Kenya’s largest elephant population and all manner of wild species.

During that time she raised and rehabilitated back into the wild community orphans of misfortune from many different wild species, including elephants, black rhinos, buffalo, zebras, elands, kudus, impalas, duikers, reedbuck, dikdiks, warthogs, civets, mongooses and birds.

She was a recognized authority on the rearing of wild creatures and was the first person to perfect the milk formula and necessary husbandry for both infant milk-dependent elephants and rhinos.

On David’s passing in 1977, Daphne founded The David Sheldrick Wildlife Trust (DSWT) and, over the next 40 years, helped shape the world’s understanding of elephants and rhinos and, critically, she played a pivotal role in the protection of these species.

Daphne was the first person to successfully hand raise a milk dependent new born elephant and rhino, knowledge that has seen more than 230 orphaned elephants saved in Kenya, and countless other infant elephants in countries across Africa and into India.

Daphne lived alongside elephants and learned to read their hearts, much as they read ours - she understood their fragility, their intelligence, their capacity to love, to grieve, to heal, to support one another and she took those lessons to the global stage.

In doing so, Daphne became a leading voice for elephants, never through a desire for the limelight, only ever driven by her belief that elephants, and other wild species, have a right to live a free and protected life just like us.

Daphne’s life’s work has featured in countless television programmes, including the BBC’s Elephant Diaries, 60 minutes - The Orphanage, For the Love of Elephants and The Elephant Who Found a Mom.

The feature length documentaries Gardeners of Eden and IMAX’s Born to Be Wild, and too many publications to mention.

Daphne’s own writings have included four books and most recently her autobiography Love, Life and Elephants - An African Love Story.

Daphne Sheldrick was decorated by Queen Elizabeth II in 1989 with an MBE due to her dedication to conservation in Kenya.

Following this, she was elevated to UNEP's elite Global 500 Roll of Honour in 1992 and was awarded an Honorary Doctorate in Veterinary Medicine and Surgery by Glasgow University in June 2000.

In December 2001, Daphne's work was further honoured by the Kenya Government, who presented Daphne with a Moran of the Burning Spear (MBS) followed by a prestigious accolade in 2002 by the BBC of their Lifetime Achievement Award.

In the November 2005 issue of the Smithsonian Magazine, Daphne was then named as one of 35 people worldwide who have made a difference in terms of animal husbandry and wildlife conservation.

In the 2006 New Year's Honours List, Queen Elizabeth II appointed Dr Daphne Sheldrick to Dame Commander of the Most Excellent Order of the British Empire, the first Knighthood to be awarded in Kenya since the country received Independence in 1963.”

For her work in this field Daphne Sheldrick was decorated by the Queen in 1989 with an M.B.E.

Following this she was elevated to U.N.E.P.’s elite Global 500 Roll of Honour in 1992 and was awarded an Honorary Doctorate in Veterinary Medicine and Surgery by Glasgow University in June 2000.

In the 2006 New Year’s Honours List, Queen Elizabeth II appointed Dr Daphne Sheldrick to Dame Commander of the Most Excellent Order of the British Empire, the first Knighthood to be awarded in Kenya since the country received Independence in 1963.