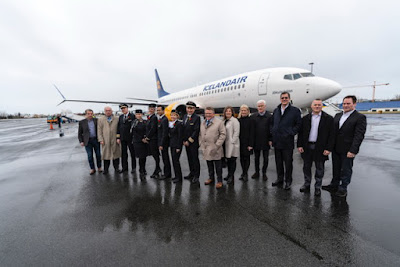 Bucking the trend of some rather anticlimactic airline launches recently, Icelandair announced the arrival of its first new Boeing 737 MAX 8 last week in a really smart and memorable way.

The airline also invited a group of its executives to join them on a special route overlooking some of the country’s most dramatic landmarks and, Iceland being Iceland, that’s pretty dramatic.

As all Icelandair planes are named after Icelandic volcanoes or areas of natural beauty, the new Boeing 737 MAX 8, dubbed Jokulsarlon in honour of the famous glacial lagoon, bordering the Vatnajokull National Park took a scenic flight route to the north of the country, to take in Akureyri the town where Icelandair was first established, in 1937, the Mountains of Trollaskagi, Eyjafjord in Akureyri, Reykjavik and the Hvalfjord highlands.

Hosted by Icelandic landscape photographer, Pall Jokull, guests on board the inaugural flight were given an in-air tutorial in order to make the most of this rare opportunity and snap the best images possible.

Then, armed with Jokull’s expert advice the passengers were able to line up their lenses, lit by the aircraft’s new LED lighting system, to capture a vivid memento of the extraordinary flight.

Praising the redesigned windows of the aircraft, Jokull extolled their photographic virtues.

Capturing a good photo from the Boeing 737 MAX is a combination of the light available and the composition of what you see out there, landscape/sky, and will be made easier with the new redesigned windows.

The new aircraft has been extensively remodelled by Icelandair and the enhanced cabin incorporating a Boeing Sky Interior combined with large overhead storage space.

The aforementioned LED lighting and panoramic windows are the result of years of research by the airline into how to maximise passengers’ flight experience.

Play with colours, lights and shadows to add depth to your photo. Clouds can make an interesting pattern on the ground. In Iceland, the contrasts of a snow-covered landscape against rivers or lakes can make a good photo.

The black sand beaches or a rocky coastline against the surf and the waves of the blue Atlantic.

As the ground is slowly changing colour from the brown and yellow autumn and winter tones you might find green colours popping out, for example on moss covered lava.

Use the rule of thirds: carefully balance the space between the sky and the ground: 1/3 sky versus 2/3 ground works well.

When you are in the air and can only see the sky and/or clouds, you can use the wing and engine as a prominent part of the photo.

Including part of the aircraft wing in the shot can make the landscape really stand out.

The window of the aircraft also nicely frames the landscape. When you are photographing the landscape below, the wing will automatically point diagonally upwards in the photo, creating a connection between the plane and the ground.

When taking a photo of a beautiful sunset/sunrise from the plane you should use aperture priority or manual to get the best results. If it’s getting dark then adjust your ISO setting to 800-1200.

The golden hour before and after sunset or sunrise can be rather long in Iceland, especially in the winter because of the low angle of the sun.

The sunset light can linger, providing up to two hours of beautiful golden, pink, red and purple colours until the dark blue colour of the night takes over.

To reduce glare on your picture from the window of the plane, hold the camera lens close to the window or even covering it with your other hand so the reflection does not reach into the lens.

Take full advantage of the new Boeing 737 MAX LED light settings to help shooting at dark by waiting until the cabin lights are set to night mode.

Photographing northern lights from a window of a plane requires the use of a tripod, as you would use on the ground.

By setting the camera to ISO 2500-4000 and using f/2.8 or lower with 5-10 second shutter speed you should be able to capture some northern lights.

Try to set the camera lens up to the window to minimalise glare reflecting the light of the window.

In general, it is better to sit on the left side of the plane if you plan to photograph through the window. It is easier for your posture and for framing the shot so you don‘t have to twist your body to get the shot.

Bjorgulfur Johannsson, president and CEO at Icelandair said: Welcoming 16 new aircraft into Icelandair’s fleet over the next four years marks our commitment towards continually improving our customer experience.

The Boeing 737 MAX family will enable us to continue to strengthen our route network and offer our customers choice and flexibility in this highly competitive environment.

In early summer 2018, the airline will start five new North American routes in addition to commencing flights between Dublin and Reykjavik.

In addition to investing in its product in the air and strengthening its network, the customer online experience has been updated too with a newly launched website that’s available in 16 new languages and easier than ever to navigate.