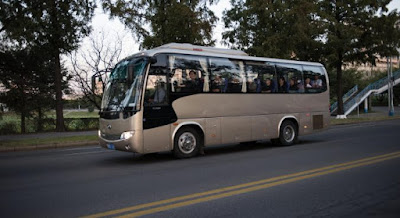 Chinese tourists have been involved in a major road accident in North Korea and there are a large number of casualties, China's foreign ministry said.

Diplomats rushed to the scene of the accident in North Hwanghae province, which happened on Sunday evening, the ministry added, without saying how many people had either been injured or killed.

The Chinese Embassy in North Korea was informed by the DPRK that a serious traffic accident occurred on North Korea's Huanghai Road at night, causing heavy casualties to Chinese tourists, the statement said, adding that relevant details are currently being verified.

The ministry explained that an emergency mechanism has been put in place and the government is sparing no effort to investigate,

The accident involved a group of Chinese travel company staff, near an area of a roadway which is under construction.

Chinese state television's English-language channel tweeted that a tour bus had fallen off a bridge, killing more than 30 people, but later deleted the tweet.

State television's main Chinese language news channel later showed images of a crashed blue bus with its wheels in the air, in footage taken in pouring rain in the dark.

It showed at least one person being treated in hospital, but also gave no details of casualties.

In a separate statement, China's health ministry said it was sending a team of medical experts along with equipment and drugs to North Korea to help treat survivors.

North Korea is a popular tourist destination for Chinese, especially from north-eastern China.

Chinese MFA spokesperson Lu Kang later on Monday reported that 32 Chinese nationals and four North Koreans were killed in the accident, adding that an additional two PRC citizens were in a critical condition due to serious injury.

About 80 per cent of all North Korea's foreign tourists are Chinese, it said.