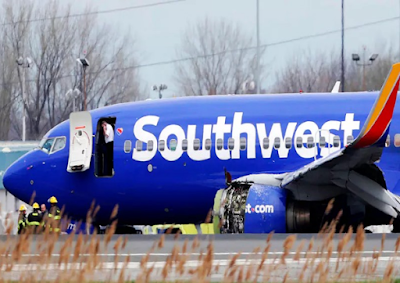 Southwest Airlines Boeing 737-700 with 149 people aboard performed an emergency landing at Philadelphia International Airport on April 17 after an engine exploded and broke apart in mid-air causing one fatality.

Southwest flight 1380 took off from New York’s LaGuardia Airport at around 10:27 a.m. and was diverted to Philadelphia just under an hour later.

This took place after crew members reported damage to an engine, the fuselage and at least one window, the Federal Aviation Administration said.

Chairman of the National Transportation Safety Board (NTSB), Robert Sumwalt, said at the Philadelphia airport that a preliminary investigation found an engine fan blade missing.

This having apparently broken off, and that there was metal fatigue at the point where it normally attached.

The Southwest Airlines Boeing 737-700 was powered by CFM56-7B engines.

In the statement regarding the accident, CFM reported that CFM team of technical representatives has been sent to assist the NTSB in its investigation.

Sumwalt said that the investigation could take 12 to 15 months to complete.

The CFM56-7B engine powering this aircraft has compiled an outstanding safety and reliability record since entering revenues service in 1997 while powering more than 6,700 aircraft worldwide.

The engine has accumulated more than 350 million flight hours as one of the most reliable and popular jet engine in airline history.

Notably, the death of 43-year-old Jennifer Riordan on Flight 1380 was the first in a U.S. commercial aviation accident since 2009, according to National Transportation Safety Board (NTSB) statistics.

The passengers of the flight said the woman was pulled out of the plane up to her waist, her blood splattering other windows.

This is a very sad day, and on behalf of the entire Southwest family I want to extend deepest sympathies for the family and loved ones of the deceased customer, Southwest Chief Executive Officer Gary Kelly said speaking in an auditorium called Freedom Hall at Southwest’s headquarters in Dallas.

They are our immediate priority and concern. We will do all we can to support them during this very difficult time and in the difficult days ahead.