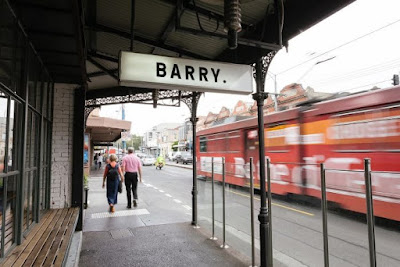 Barry cafe former staff in Melbourne's say they were underpaid by at least $5 an hour.

When they tried to discuss their wages with the owners their shifts were cancelled indefinitely.

Workers had their shifts cancelled on Friday night after they sent the owners an email on behalf of nine staff asking to be paid the award rate.

Her payslip shows an hourly rate of $18 for shifts including weekends.

When staff at Barry discovered the anomaly, they approached the owners to discuss it as a group.

The request was rejected though.

As staff were on duty, the owners begun interrogating them.

They were asked questions such as:; who's the ringleader?

Staff sent a text message on April 7, again requesting a group meeting. That request was rejected once again.

In a text message to fstaf, Mr Petroulias told said - Everyone can talk to me separately. It's the only way we can talk.

When asked why they could not meet as group, he replied: Each one is a separate agreement. We can discuss separately.

At that point, employees then decided to look for external advice.

We saw that we weren't going to get anywhere, so we got in touch with the Young Workers Centre and told them what was going on, staff said.

Young Workers Centre helped the staff draft an email to the owners of Barry Cafe, signed by staff.

That email was sent on Friday afternoon. Mr Petroulias responded in an email later that evening.

- Hi Anna, Just to let you know that you and the other staff agreed each and every one of you the rate that you would be paid.

- On top of that you all had free meals free unlimited coffees, and paid during your meal break. You came and went when ever you felt like and you begged us to come back after seven months away.

- On top of that you asked us to employ your sister as well. If you weren't satisfied with your pay why all that.

- All of you had previous experience, had worked in other cafes and you knew what the rates were.

- Hi Anna. I just want to let you know that your shift for tomorrow has been canceled. We let you know if we need you again. Thank you, the message said.

Two other workers who signed the letter also lost their shifts.

Mr Petroulias said the shifts were cancelled because the cafe had too many staff, and that they were employed on a casual basis.

They are casuals, they come whenever they went to, six months later, one will take a holiday. That's how casual is, he said.

Hannah Paletu'a resigned after receiving a text message saying her shifts had been cancelled. She does not accept the claim that the cafe was overstaffed.

She said during her time at Barry, she never saw anyone's shifts cancelled.

se said they were always short-staffed.

Staff said they were shocked at the owners' reaction.

Staff started off reasonably requesting a meeting, they didn't even mention backpay.

But owners reacted really badly and just shut staff down.

This is the most successful cafe in the neighbourhood, and they're underpaying their staff by 25 per cent.

Staff said all they asked for was the minimum award rate.

Mr Petroulias said he did not know he was underpaying his workers.

I had a look on Google, and it said the average rate was $15 to $17 an hour, or something like that. And I was under the impression that $18 was the minimum rate, he said.

When this was pointed out, Mr Petroulias replied - If there is a mistake, I will correct it.

I presumed that when they accepted the job, they were happy with what they were getting.

Mr Petroulias said that staff were provided with meals and coffee during their shifts, and that they were paid for their break of around 20 minutes on an eight-hour shift.

Staff said the breaks were too short, especially on busy weekend shifts.

Patrons were enjoying lunch when the protestors descended around them, making it near impossible to talk.

Despite the inconvenience, patrons supported the workers.

I think good on them, and they should be entitled to a liveable wage and paid penalty rates and given breaks and not be paid in food, patrons said.

I feel quite guilty sitting here amongst it all unsuspectingly, and I probably won't be coming back.

The Melbourne hospitality industry is under the microscope over pay and conditions.

It has been reported Vue de monde a restaurant required staff to work more than 20 hours a week in underpaid overtime.

Jess Walsh is the Victorian secretary of the hospitality union United Voice, which is mounting a campaign against underpayment in the industry.

The way Barry Cafe has behaved could not be further away from the ethos of this community, she says.

We will be coming out in force to stand with these workers to send a strong message to this cafe and venues across the state that we are not going to put up with this kind of treatment of hospitality workers any longer.