Korean Air has suspended its CEO's younger daughter while police investigate reports she threw water at an advertising executive in a meeting.

Cho Hyun-min, 36, a senior vice-president at the company, has apologised and called her behaviour "foolish and reckless".

She denies throwing water but admits to shoving the advertising agency manager.

She is the younger sister of Cho Hyun-ah - the airline heiress who infamously delayed a flight over a packet of nuts.

Ms Cho, who is also known as Emily, lost her temper because she was unhappy with answers to her questions during the meeting in Seoul last month.

The national carrier said in a statement it would take appropriate action after the police investigation was over.

Ms Cho issued an apology on her Facebook page on Thursday: "I have no words to say for my action that I should not have done under any circumstances."

The airline said on Monday she had thrown a cup of water on the floor, but not at anyone's face.

The owners of Korean Air have been under intense scrutiny since Ms Cho's sister, who is also known as Heather, famously flew into a rage when macadamia nuts were served to her in a bag and not on a plate on a Seoul-bound flight from New York in December 2014.

The case attracted intense attention in South Korea, reopening a national debate about the Korean business system, which is dominated by family firms known as chaebols.

The incident was eventually brought to trial, and Cho Hyun-ah was convicted of violating aviation safety, coercion and abuse of power in 2015.

An appeals court later reduced the one-year sentence to a suspended term, and she was released after five months in jail.

She recently returned to a management role at the firm's hotel wing. 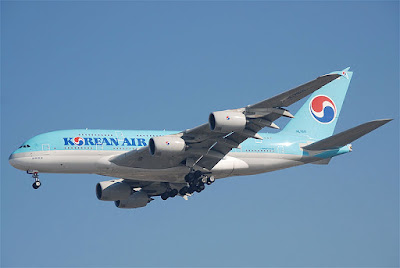 The airline's global headquarters are located in Seoul, Republic of Korea. Korean Air was founded as Korean National Airlines in 1946. After several years of service and expansion, the airline was fully privatized in 1969.

It is among the top 20 airlines in the world in terms of passengers carried and is also the top-ranked international cargo airline. Incheon International Airport serves as Korean Air's international hub.

Korean Air also maintains a satellite headquarters campus at Incheon. The majority of Korean Air's pilots, ground staff, and flight attendants are based in Seoul.

Korean Air is the parent company of Jin Air and is a founding member of the SkyTeam airline alliance. It was voted Asia's best airline by Business Traveler readers in 2012.

Korean Air was founded by the South Korean government in 1962 as Korean Air Lines to replace Korean National Airlines, which was founded in 1946.

On March 1, 1969, the Hanjin Transport Group took control of the airline. Long-haul freight operations were introduced on April 26, 1971, followed by passenger services to Los Angeles International Airport on April 19, 1972.

International flights to Hong Kong, Taiwan and Los Angeles were flown with Boeing 707s until the introduction of the Boeing 747 in 1973.

In 1973, the airline introduced Boeing 747s on its Pacific routes and started a European service to Paris, France using the 707 and then McDonnell Douglas DC-10.

In 1975, the airline became one of the earliest Asian airlines to operate Airbus aircraft with the purchase of three Airbus A300s, which were put into immediate service on Asian routes.

Since South Korean aircraft were prohibited from flying in the airspace of North Korea and the Soviet Union at the time, the European routes had to be designed eastbound from South Korea, such as Gimpo-Anchorage-Paris

A blue-top, silver and redesigned livery with a new corporate Korean Air logo featuring a stylized Taegeuk design was introduced on March 1, 1984, and the airline's name changed to Korean Air from Korean Air Lines.

This livery was introduced on its Fokker F28 Fellowships. It was designed in cooperation between Korean Air and Boeing.

In the 1990s, Korean Air became the first airline to use the new McDonnell Douglas MD-11 to supplement its new fleet of Boeing 747-400 aircraft.

However, the MD-11 did not meet the airline's performance requirements and they were eventually converted to freighters.

Some older 747 aircraft were also converted for freight service.

In the 1980s, Korean Air's head office was in the KAL Building on Namdaemunno, Jung-gu, Seoul.

Jin Air started its scheduled passenger service from Seoul to Jeju on July 17, 2008. Korean Air announced that some of its 737s and A300s would be given to Jin Air.

By 2009, Korean Air's image had become more prestigious, differing from the airline's late-1990s image, which had been tarnished by several fatal accidents.

In mid-2010, a co-marketing deal with games company Blizzard Entertainment sent a 747-400 and a 737-900 taking to the skies wrapped in StarCraft II branding.

In August 2010, Korean Air announced heavy second-quarter losses despite record high revenue. In August 2010, Hanjin Group, the parent of Korean, opened a new cargo terminal at Navoi in Uzbekistan, which would become a cargo hub with regular Incheon-Navoi-Milan flights.

Korean Air owns five hotels: two KAL hotels on Jeju island, the Hyatt in Incheon; Waikiki Resort in Hawaii and a hotel/office building called the Wilshire Grand Tower which is being redeveloped.

The airline also flies 13 domestic destinations within South Korea. KAL operates between Incheon and 22 cities in mainland China, and along with Asiana Airlines, it is one of the two largest foreign airlines to operate into the People's Republic of China.

Korean Air codeshares with these airlines:

Korean Air is also an airline partner of Skywards, the frequent-flyer program for Emirates. Skywards members can earn miles for flying Korean Air and can redeem miles for free flights.

Korean Air has made the following orders:

The Kosmo Suites seats and the Prestige Sleeper seats were first introduced in the Boeing 777-300ERs in May 2009. Both seats could stretch to 180 degrees, and became more private than seats before.

The Korean Air Airbus A380-800 aircraft also feature an inflight bar called the Celestial Bar in partnership with Absolut Vodka, featuring a range of Absolut cocktails, along with an integrated lounge space.

It is located on the upper deck Business Class cabin, and is accessible only to First and Prestige class passengers.

On the lower deck of the A380, there is a Lancome designed duty-free shop located in the rear of the cabin that is available to all passengers.

The program's elite levels are comparable to those of other airlines' frequent-flyer programs, requiring members to fly 30,000 miles per two-year cycle - initial entry into this level requires 50,000 miles.

Qualification for the highest level is based on lifetime flight miles, requiring a customer to fly 1 million miles for Million Miler, which is the highest elite status or 500,000 miles for Morning Calm Premium, which comes second.

Both membership levels are eligible for SkyTeam Elite Plus privileges. Membership in these levels are granted for life. 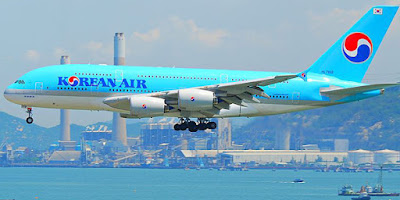 Korean Air is also involved in aerospace research and manufacturing.

As well as the Northrop F-5E/F Tiger II fighter aircraft, the aft fuselage and wings for the KF-16 fighter aircraft manufactured by Korean Aerospace Industries and parts for various commercial aircraft including the Boeing 737, Boeing 747, Boeing 777 and Boeing 787 Dreamliner; and the Airbus A330 and Airbus A380.

In 1991 the division designed and flew the Korean Air Chang-Gong 91 light aircraft.

In October 2012, a development deal between Bombardier Aerospace and a government-led South Korean consortium was announced, aiming to develop a 90-seat turboprop regional airliner, targeting a 2019 launch date.

The consortium would include Korea Aerospace Industries and Korean Air Lines.

Korean Air had many fatal accidents between 1970 and 1999, during which time 16 aircraft were written off in serious incidents and accidents with the loss of 700 lives.

Two Korean Air aircraft were shot down by the Soviet Union, including Korean Air Lines Flight 007 on September 1, 1983 that was carrying 269 people, including a sitting U.S. Congressman, Larry McDonald.

The last fatal passenger incident was the Korean Air Flight 801 crash in 1997, which killed 228 people. The last crew fatality was in the crash of Korean Air Cargo Flight 8509 in December 1999.

Korean Air has been cited as one of the examples of the South Korean chaebol system, wherein corporate conglomerates, established with government support, overreach diverse branches of industry.

The process of privatization of Korean National Airlines in 1969 was supported by Park Chung-hee, the South Korean military general-president who seized power of the country through a military coup d'état; and the monopoly of the airline was secured for two decades.

After widening the Jaebeol branches, the subsidiary corporations of Korean Air include marine and overland transportation businesses, hotels and real estate among others; and the previous branches included heavy industry, passenger transportation, construction and a stockbroking business.

The nature of the South Korean chaebeol system involves nepotism. A series of incidents involving Korean Air in 2000s have revealed an ugly side of the culture within chaebeols, South Korean’s giant family-run conglomerates.

Cho Hyun-Ah, also known as Heather Cho, is the daughter of the chairman Cho Yang-ho. She resigned from some of her duties in late 2014 after she ordered a Korean Air jet to return to the gate to allow a flight attendant to be removed from the aircraft.

The attendant had served Cho nuts in a bag instead of on a plate. As a result of further fallout, Cho Hyun-Ah was later arrested by Korean authorities for violating South Korea's aviation safety laws.