OMAN: Oman Air To Phase Out Embraer 175 Jets And Replace With Dreamliner Or Airbus A350 Jets Before 2023 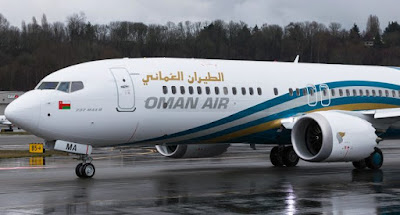 Around 9.8 million passengers are expected to fly with the airline this year

Oman Air is considering adding more flights to Asia, including to China and South Korea, but is delaying its break even date to beyond this year, its new chief executive said on Sunday.

The state-owned airline, which no longer relies on government funding, had earlier delayed its break even date from 2017 to this year.

It could now potentially break even in the next two to three years, Chief Executive Abdulaziz al-Raisi in Dubai. He later said it was difficult to set a date because stemming losses would partly depend on external factors.

Middle East air traffic has been disrupted in recent years by conflict in Iraq and Syria.

A political dispute in the Gulf since last June has also barred flights from Qatar to Saudi Arabia, the United Arab Emirates, Bahrain and Egypt.

Raisi said he was concerned about escalating conflict after a warning this month for airlines to exercise caution in the eastern Mediterranean ahead of air strikes by the United States, Britain, and France on Syria.

Parts of the Middle East airspace are already congested and any changes to flight paths usually mean higher fuel costs and longer flying times for airlines.

Raisi, a 33-year Oman Air veteran, was appointed as CEO earlier on Sunday having held the position in an acting capacity since October.

He said the airline would focus on carrying more passengers to and from Oman.

We are not trying to compete with the three big ones, Raisi said, referring to the region’s biggest airlines Emirates, Qatar Airways, and Etihad Airways, which focus on connecting passengers through their Gulf hubs.

Oman Air could fly to more destinations in Asia from as soon as 2019 after starting flights to Istanbul, Casablanca, Moscow, and the Maldives this year, Raisi said at the Arabian Travel Market exhibition in Dubai.

Around 9.8 million passengers are expected to fly with the airline this year, up from 8.5 million, he added.

Oman Air intends to phase out its four Embraer 175 jets this year and will place a new order for Boeing 787 Dreamliner aircraft or Airbus A350 jets before 2023 to replace its A330s, Raisi said.

He did not disclose how many jets they could order.