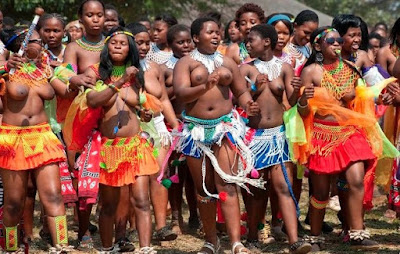 Swazi culture is the way of life and customs of the Swazi people through various historical stages.

The culture of Swazi people involves music, food, religion, architecture, kinship among many other things. The Swazi people are composed of various Nguni clans who speak the Nguni language SiSwati.

These people mostly reside in Swaziland and South Africa. Presently, Swazi people may also include citizens of Swaziland.

In Swaziland, one of the most visible features of cultural identity is the traditional political structure of the nation and the home.

In the national level, the Ngwenyama or the Lion, or King is considered the head of the nation alongside the Ndlovukati the She Elephant, or Queen Mother who is the spiritual leader of the nation.

National cultural events often involve the Ngwenyama or Ndlovukati. At home, the patriarch of the family is the head and in the past, often practiced polygamy.

This headman, usually referred to as umnumzane is central to all activities of the home. A group of homes forming a community and the land they reside on forms a chiefdom or umphakatsi.

Several chiefdoms form an inkhundla which then belongs of a regional division of the country. This connects the older traditional leadership structures to more modern forms of government.

There are national cultural events such as umhlanga, emaganu and incwala which take place at Royal residences of the Ngwenyama and Ndlovukati.

Local cultural events in communities or imiphakatsi, take place at the residence of the chief also called emphakatsini.

Weddings, funerals and religious events are usually carried out at family homesteads where neighbors are usually invited to partake.

The principal Swazi social unit is the homestead, a traditional beehive hut thatched with dry grass.

In a polygamous homestead, each wife has her own hut and yard surrounded by reed fences. There are three structures for sleeping, cooking, and storage also brewing beer. 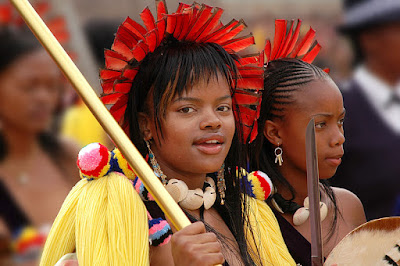 In larger homesteads there are also structures used as bachelors' quarters and guest accommodation.

Central to the traditional homestead is the cattle byre, or kraal, a circular area enclosed by large logs inter-spaced with branches.

The cattle byre has ritual as well as practical significance as a store of wealth and symbol of prestige. It contains sealed grain pits.

Facing the cattle byre is the great hut which is occupied by the mother of the headman.

The headman is central to all homestead affairs and he is often polygamous. He leads through example and advises his wives on all social affairs of the home as well as seeing to the larger survival of the family.

He also spends time socialising with the young boys, who are often his sons or close relatives, advising them on the expectations of growing up and manhood.

The Sangoma is a traditional diviner chosen by the ancestors of that particular family. The training of the Sangoma is called kwetfwasa.

At the end of the training, a graduation ceremony takes place where all the local sangoma come together for feasting and dancing.

The diviner is consulted for various reasons, such the cause of sickness or even death. His diagnosis is based on kubhula, a process of communication, through trance, with the natural super-powers.

The Inyanga a medical and pharmaceutical specialist in western terms possesses the bone throwing skill kushaya ematsambo used to determine the cause of the sickness.

The most important cultural event in Swaziland is the Incwala ceremony.

It is held on the fourth day after the full moon nearest the longest day, 21 December. Incwala is often translated in English as first fruits ceremony, but the King's tasting of the new harvest is only one aspect among many in this long pageant.

Incwala is best translated as Kingship Ceremony : when there is no king, there is no Incwala. It is high treason for any other person to hold an Incwala.

Every Swazi may take part in the public parts of the Incwala. The climax of the event is the fourth day of the Big Incwala.

The key figures are the King, Queen Mother, royal wives and children, the royal governors or indunas, the chiefs, the regiments, and the bemanti or water people.

In the eight-day ceremony, girls cut reeds and present them to the queen mother and then dance. There is no formal competition.

It is done in late August or early September. Only childless, unmarried girls can take part.

The aims of the ceremony are to preserve girls' chastity, provide tribute labour for the Queen mother, and to encourage solidarity by working together.

The royal family appoints a commoner maiden to be induna or captain of the girls and she announces over the radio the dates of the ceremony.

She will be an expert dancer and knowledgeable on royal protocol. One of the King's daughters will be her counterpart.

The Reed Dance today is not an ancient ceremony but a development of the old umchwasho custom. In umchwasho, all young girls were placed in a female age regiment.

If any girl became pregnant outside of marriage, her family paid a fine of one cow to the local chief.

After a number of years, when the girls had reached a marriageable age, they would perform labour service for the Queen Mother, ending with dancing and feasting.

The country was under the chastity rite of umchwasho until 19 August 2005.

Swazi art varies from pottery to jewellery among many other things. Historically Swazi people have made jewellery and clothing items from beads.

An example of this is ligcebesha, a colourful necklace and indlamu and colourful skirt for girls.

Swazis also made a lot of items using special grasses. These include grass mats called emacansi and tihlantsi. Other grass items are brooms, baskets among others.

Swaziland is also known for a strong presence in the handcrafts industry. The formalised handcraft businesses of Swaziland employ over 2,500 people, many of whom are women.

The products are unique and reflect the culture of Swaziland, ranging from housewares, to artistic decorations, to complex glass, stone, or wood artwork.

The music of Swaziland is composed of both ethnic Swazi music and varieties of folk music as well as modern genres such as rock, pop and hip hop, which has been popular in Swaziland since the 1990s, headed by bands such as Vamoose.

The popularity of hip hop in South Africa, which shares a border with Swaziland, has also helped popularize it. 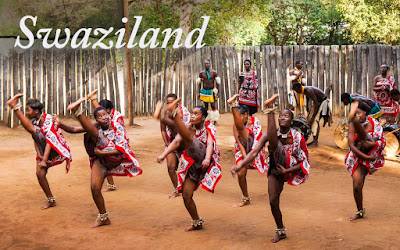 Umhlanga is known for its dance, performed exclusively by women, and its 5-day ceremony, which involves reed-cutting. Traditional instruments used include: the kudu horn, calabash, rattles, makeyana and reed flute.

Christianity is the dominant religion in Swaziland. The relative prevalence percentage vary by source.

According to Pew Research, over 88% of the total 1.2 million population of Swaziland express Christianity to be their faith, over 10% express no affiliation.

According to the US State Department religious freedom report of 2012, local religious leaders estimate that 90% of Swaziland's population is Christian, 0.2% is Muslim, while under 10% belong to other religious groups.

In other sources such as Clay Pots, the religious demographics are 80% Christian, and 20% Traditional Swazi religion.

Anglican, Protestant and indigenous African churches including African Zionist, and Roman Catholics constitute the majority of the Christians in the country.

On 18 July 2012, Ellinah Wamukoya was elected Anglican Bishop of Swaziland; on 17 November 2012 she became the first woman to be consecrated as a bishop in Africa.

The Constitution of the Kingdom, which went into effect on February 8, 2006, provides for freedom of religion.

The Government respects freedom of religion. There have been reports, as of societal discrimination based on religious affiliation, belief, or practice.

The king of Swaziland, Mswati II invited Methodist Christian missionaries to his kingdom in 1825.

The Christian missions largely failed through 1881, and had few conversions to their credit. A larger presence of missionaries began in 1881 when members of the United Society arrived to establish the presence of the Church of England.

Lutherans arrived in 1887 from Germany, and Methodists restarted their efforts in 1895 out of their Christian missions in South Africa.

A Gothic-style church, which was built in 1912, still stands in Mahamba, and is the oldest existing place of worship in the country.

A large Roman Catholic presence, including churches, schools, and other infrastructure, exists in the country.

The country forms a single diocese, the Diocese of Manzini. The Zionist Churches, which blend Christianity and indigenous ancestral worship, and were developed in the early part of the 19th century, predominate in rural areas.

Christian holidays such as Good Friday, Christmas, Ascension Day are part of the national holiday calendar.

According to Sibongile Nxumalo, the Christian missionaries that ignored or misconstrued the positive aspects of traditional beliefs, customs and institutions of Swazi society have largely been unsuccessful.

The Christian organizations of Swaziland have been closely involved in the politics of the country.

The colonial era Swaziland League of African Churches has had a long relationship with the royalty of Swaziland, and held public ceremonies such as Easter on the behalf of the King.

The Zionist churches celebrate the Good Friday over three days with singing and dancing.

The Swaziland Conference of Churches have historically attempted to be apolitical, but in 2004 they campaigned to make Christianity the state religion through a constitutional amendment, a move opposed by the King.

The third politically influential Christian organization in Swaziland has been the Council of Swaziland Churches.

Established in 1976 as refugees flooded into Swaziland, and this group voiced views on Apartheid in South Africa and the ongoing civil war in nearby Mozambique.

Their views contradicted the state's position, and the leaders of this new Council were then threatened with arrests and prison terms.

The traditional Swazi religion recognizes a supreme God and creator, but more important are the spirits of ancestors.

Swazi religion speaks of a creator known as Mvelincanti, he who was there from the beginning.

Mvelincanti is too remote and so it is ancestral spirits emadloti is more relevant in day-to-day life.

Beasts are slaughtered and beer was brewed to please or placate the spirits, and ask for help.

The rituals are performed at the level of family associated with birth, death and marriage.

Some Swazis blend these traditions with contemporary Christian practices.

In the hierarchy of Swazi society, the king assumes the leadership position.

The incwala ritual, which is performed annually, is considered a national religious event.

The objectives of the event are to reflect the growth of the king, and to thank the ancestors for good harvests and to pray for good rain in the coming year.

This event, which only takes place when there is a king, is the most sacred national event and all male Swazis are participant.

The holiday for incwala depends on the phases of the moon, and is at the end of the six-week event.

Followers of Islam, the Baha'i Faith, Hinduism and Judaism are largely immigrants located in urban areas.

The Muslims in Swaziland are indentured workers who arrived from South Asia during the colonial era.