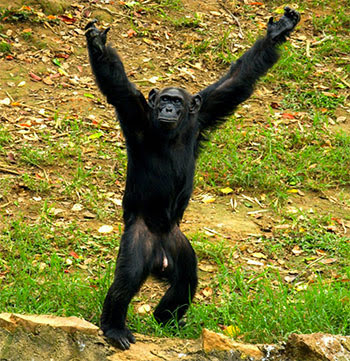 The 54-year old male chimpanzee popularly known as Zakayo, who has lived at Uganda Wildlife Conservation Education Centre (UWEC) in Entebbe for 42 years is dead.

Zakayo was the oldest known captive chimpanzee in the country.

"Due to his old age, he was highly susceptible to opportunistic infections," reads the statement.

Adding that, "Please join us as we celebrate the life of this legendary chimpanzee that once lived as a dorminant male and brought up the chimpanzee family at UWEC."

According to UWEC, Zakayo nurtured two Alpha male chimpanzees, Matooke, who led the group up to 2013, and Aluma who took over in 2013 up to date.

UWEC will hold a vigil for Zakayo on Friday at UWEC beach starting at 6pm followed by his burial on Saturday.

Many Ugandans expressed shock at the death of Zakayo:

"Rest in peace of beloved brother, you brought in more tourists money than many of the foreign investors from China, am told you are survived by 5 widows and 79 children and 45 grand children."

"We shall be available for the vigil and also suggest that you body is treated and kept at Uganda Museum."

"Zakayo was more important to Uganda than these so called heroes"

"He should be awarded a state funeral and be buried inside the State House."

"Zakayo deserves a posthumous medal for attracting tourists to Uganda."

"Fifty four years of being in captivity is not a walk in the park.

I bet zakayo is roaming free in chimp heaven, no fences, no stress."

Zakayo above also, with his chimphood!

"Since he fundamentally had fun and peace in the Zoo, I don't know whether or not to wish Zakayo to rest in peace: free bananas, free swing, etc."

"Otherwise humans are wished, rest in peace because all their lives are full of trials and travails. Therefore death become the only rest from "suffering" and/or frustration."