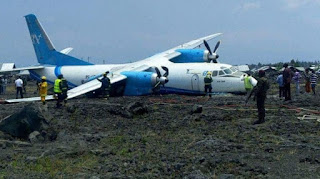 A Serve Air Cargo Antonov AN-26 performing a cargo flight from Goma to Bunia (DR Congo) with 4 crew, was climbing out of Goma when one of the engines (AI-24VT) failed prompting the crew to return to Goma’s runway 35.

The aircraft touched down at about mid point of the runway and did not stop before the end of the runway coming to a stop on the remains of the lava field of 2002 north of the runway.

According to ATDB the airline operates one Antonov AN-26.