TANZANIA: You Can Help People With Albinisim 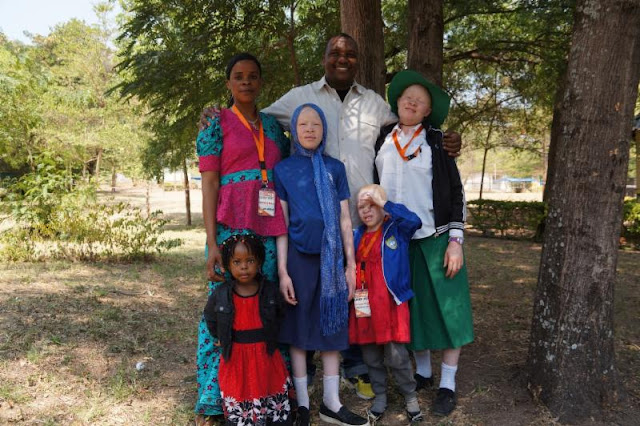 Zuwena and four of her precious girls, with a UTSS worker.

Zuwena is a single mother with five daughters who lives in Mwanza. Three of her young girls have albinism.

Abandoned by her husband, Zuwena had to work long hours as a seamstress to support her children.

She left her kids with a nanny who took care of them while she was at work.

When her neighbors noticed a strange man lurking outside of Zuwena’s home, where two of her girls – Fatuma and Rehema – played one day after school, they grew suspicious.

One neighbor hid nearby to keep an eye on the situation.

Another ran to get the community officer in charge of safety.

When the stranger noticed, he fled.

But he showed up later at a bar, asking questions about Zuwena and her girls and alarmingly, showing off a machete he carried with him.

There was little doubt that he intended to harm the little girls.

The police were called and immediately realized the danger.

That’s because they had attended Understanding Albinism seminars given by Under The Same Sun in the area.

They understood how vulnerable Zuwena’s children were, and became suspicious of the nanny.

They went to visit Zuwena at her work to alert her of the danger.

Zuwena sent her nanny away and her children survived this ordeal.

What we believe was intended to be an abduction or a direct attack was thwarted because of the vigilance and compassion of the neighbors and the police.

Today, Zuwena is part of our Mamas Group in Mwanza.

She and her children are receiving the support they need. And through training she is educating others to understand albinism.

Under The Same Sun sees it all the time: When people know better they do better!

When people learn the facts about albinism through our Understanding Albinism seminars they become informed and more compassionate, and often help fight to protect the girls and boys and women and men with albinism in their communities.

This kind of community action is what saves lives and discourages would-be criminals.

Would you consider making a gift for Giving Tuesday so more lives can be saved?

With your help, we will take our Understanding Albinism seminars to a new level and into many new communities in the coming months.

Here’s what your gift will make possible:

- Blanketing more towns and cities than ever before with the truth about albinism through Understanding Albinism seminars. It’s proven! They dispel the dehumanizing myths that lead to attacks.

- Live public theatre presentations, put on by local young people, that really work to educate people and increase compassion for people with albinism.

- Print ads, interactive radio programs and a new social media push to reach an even wider audience in Tanzania.

- And…for the first time, a National Albinism Hotline will be set up, so that anyone can anonymously call to report suspicious activity and get immediate help!

If you want to help save lives like Fatuma and Rehema’s please make a gift before midnight tomorrow – Giving Tuesday. Your generosity will be multiplied 9 times by a US government grant to make an ever greater impact!


Under The Same Sun is a Registered Charity. All donations are deductible for income tax purposes in Canada and the USA. 100% of your donations go directly to programs in Tanzania. All administration costs are covered by a generous benefactor.
Canadian Charitable #: 851599860 RR0001
US: EIN 68-0680719

Email ThisBlogThis!Share to TwitterShare to FacebookShare to Pinterest
Labels: Albinism, mwanza, Under the Same Sun, Zuwena