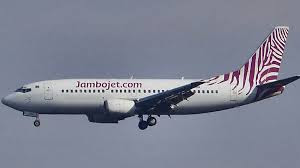 Jambojet will on February 15 start operating two daily flights between Entebbe (Uganda) and Nairobi, in what will mark the low cost carrier’s expansion outside Kenya.

The budget carrier, a subsidiary of Kenya Airways says a one-way ticket will cost customers an introductory price of Sh11,330, inclusive of taxes.

The flight time is 80 minutes.

This new route will connect businesses in Kenya and Uganda while also appealing to leisure travellers, offering them the opportunity to experience the Pearl of Africa.

Kenya late last year wrote to the governments of Uganda, Tanzania, Rwanda, Burundi, Ethiopia and Democratic Republic of Congo to allow Jambojet fly to these routes.

Jambojet, which launched locally in April 2014, had earmarked Tanzania and Uganda as its first destinations when approval are granted.

The low cost carrier, which flies between 45,000 and 50,000 passengers per month in Kenya, reported a pre-tax loss of Sh25 million for the year to March, reversing a pre-tax profit of Sh126 million recorded the previous year.

We are optimistic that the regional flight will spur the airline’s growth as well as foster regional integration at a national level, said Mr Hondius.

Jambojet has increased frequencies on most of its routes following what the budget carrier says is increased demand and flexibility offered by its newly acquired aircraft.

The low cost carrier, a subsidiary of Kenya Airways, will now fly 39 times a week to Mombasa up from 22 while passengers travelling to Kisumu from Nairobi will now be served by 20 weekly flights, an increase of six.

Jambojet has also added four frequencies to its Ukunda route, increasing them to 14 a week while its Eldoret flights are up two per week to hit 20. The Malindi route has however seen its weekly flights cut from 13 to nine.

In addition to increased demand, the no frills carrier says the frequencies adjustment is a response to their recent acquisition of two Bombardier Q400 aircraft that can do more trips cycles.

We are pleased that more passengers are choosing to fly over other means of transport, Willem Hondius, Jambojet’s chief executive officer, said in a statement.

The demand has been growing especially on the coastal routes, a clear indicator that Jambojet is contributing immensely to the growth of domestic tourism and the economy at large.

Jambojet, which has been operational since April 2014, has for a long time operated four aircraft — two Q400 planes and two Boeing 737s, the latter leased from its parent firm.

The low cost carrier returned one of the leased Q400 aircraft last year, acquired two in December 2017 with one more expected later this month.

On Sunday, it returned the last of two Boeings to Kenya Airways, leaving it with a fleet of three Q400 planes.

A lot has happened within the first few weeks of 2018 as far as air travel is concerned and it all points to good tidings for the industry in Kenya.

The recent launch of direct flights between Nairobi and New York by Kenya Airways added to a series of newly unveiled routes, both domestic and international, by various airlines.

Buoyed by increased business during the festive season, several airlines have this month announced increased flights on their current routes as well as completely new routes.

Jambojet set the ball rolling by announcing that it was increasing its flights to Mombasa, Kisumu, Ukunda and Eldoret. Jambojet cites increased demand and its acquisition of new aircrafts as the reason behind its expansion.

In the same week Jambojet announced additional flights while another local low-cost carrier Fly-Sax said it was increasing its frequency on the Mombasa route to twice daily to meet demand from traders and tourists.

A new entrant, Silverstone Air, is set to commence direct flights from Wilson Airport to Lodwar in mid-January barely six months after they entered the Kenyan market with daily flights to Kisumu and Ukunda.

The airline has announced plans to introduce direct flights between Kisumu and Mombasa and also launch flights to Migori and Lamu.

The flurry of activities in the sky is not only limited to the domestic market. Italian carrier Alitalia is set to return to JKIA with four scheduled flights a week starting from 28 March 2018.

A day later, the inaugural Air France flight from Charles De Gaulle in Paris will make its maiden flight into Nairobi after an 18-year hiatus.

It should be noted that last year, the Middle East carrier, Qatar Airways announced that Mombasa was one of the new 12 routes they were launching in 2018.

Qatar will be joining other international carriers that fly directly into and out of Mombasa hoping to tap into growing demand on that route.

Similarly, Air India is expected to return to the Kenyan airspace this year with daily flights between New Delhi and Nairobi.

There is no doubt that the Kenya airspace is once again becoming more attractive to both local and international carriers seeking to grow their pie in a shrinking global market characterised by cut throat competition.

This can be attributed to a number of factors that have placed Kenya in a pole position as an emerging potential market for air travel.

Over the years, the government has invested heavily in expanding and improving the aviation infrastructure across the country.

JKIA is obviously reaping the benefits of the recent expansion programme that has increased its annual capacity to 7.5 million passengers. Focus now needs to shift to improving other facilities across the country that are in dire need of expansion.

Another factor that has significantly contributed to the uptake of air travel in the country is the emergence of low cost carriers such as Jambojet, Fly540, Silverstone Air, Fly-Sax, Safarilink among others that continue to haul first time travellers into the sky.