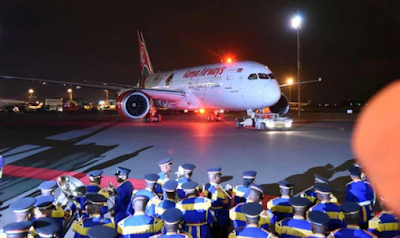 The long-awaited direct flight between Nairobi and New York City became a reality last night with the flagging off of the first Kenya Airways non-stop trip.

Kenya Airways has now reduced the more than 24 hour long journey and it will be the fastest connection from East Africa to New York City, with a 15-hour duration eastbound and 14-hours westbound.

Flights to the United States are usually characterised by long stopovers in Europe and Middle East.

While flagging off the maiden flight, President Uhuru Kenyatta said the non-stop flight to the US was a confidence boost to Kenya’s economy and a positive signal for increased foreign direct investments.

The non-stop flight between Nairobi and New York City is set to provide a seamless experience for business and leisure travellers alike. It will open up Kenya and the region to the world to enjoy our hospitality and diverse culture, he said.

Kenya Airways group managing director and chief executive Sebastian Mikosz termed it as a great milestone, adding that it will act as a catalyst for attracting corporate and high-end tourism traffic around the world to Kenya and Africa.

This will also boost the economic growth of not only Kenya but the African continent, he said. The flight had a crew of four pilots and 12 flight attendants.

The national carrier will operate its Boeing 787-8 Dreamliner with a capacity of 234 passengers on the route.

Kenya Airports Authority (KAA) said the launch was a culmination of processes, audits and assessments by US Federal Aviation Administration (FAA) and the Transportation Security Administration (TSA), an agency of the US Department of Homeland Security, that has authority over security of travelling public in the United States.

This led to JKIA achieving Last Point of Departure status, setting the stage for Kenya’s national carrier to fly directly to the US.

KAA termed the flight as an endorsement by the international aviation community on the investment they have made at JKIA in improving infrastructure and enhancing security, safety and passenger experience at the airport.

Kenya Airways flights will be departing every day from JKIA at 11:25pm arriving at JFK Airport at 6:25am the following day.

From New York, the plane will depart at 12:00pm and land at JKIA at 10:30am the following day. The national carrier said the schedule will enable connections to and from over 40 African destinations through Kenya Airways hub in Nairobi.

The national carrier is a member of the SkyTeam Alliance, flying to 52 destinations worldwide, 43 of which are in Africa and carries over four million passengers annually.

It has modernised its fleet with its 32 aircraft being some of the youngest in Africa, including its flagship B787 Dreamliner aircraft.
at October 30, 2018