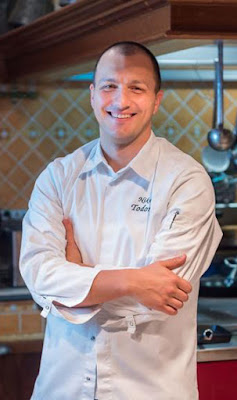 Nicholas' childhood dream was to become a chef and he has not stopped pursuing his goal.

He graduated from the Professional School of Tourism in his home-town of Varna, majoring in Culinary Arts. He began his professional career as a chef in 2005 at the newly opened Kempinski Hotel Grand Arena Bansko.

In 2009, during the National Culinary Cup competitions organised by the Bulgarian Association of Professional Chefs, Chef Todorov and his team won first place in the culinary team category.

In the same year he joined the Bulgarian national team for the International Culinary Competitions in Istanbul. In 2015, he had the opportunity to hone his skills in Russia.

There he worked at the famous Kempinski Grand Hotel Gelendzhik as Executive Sous Chef, overseeing four restaurants and banquet rooms with a capacity of up to 1000 people.

After two and a half years of this exciting experience, Chef Todorov returned to Kempinski Hotel Grand Arena Bansko as Executive Sous Chef and as a member of Chef Trevor Portelli's team.

Last summer, Chef Todorov successfully completed six weeks of intensive training with Chef Rémy Giraud at one of the most renowned restaurants in France, Les Hauts de Loire, awarded with 2-Michelin star for over 25 years.

Nikola Todorov takes on his new role as Executive Chef of Kempinski Hotel Grand Arena Bansko from Chef Trevor Portelli, who has headed the hotel's culinary team for the past two years.

The Maltese culinary professional will continue his career at home at Kempinski Hotel San Lawrenz Gozo.

Thank you very much for writing a great post. If there is anything in my life that I think is very important and I should understand it, I always try to understand it and I have seen your post. Saw this and liked this post a lot, so I am complimenting your post thoughtfully.
Real gurugram escorts
Lying person
call girls in gurugram
Call Girls In DLF Phase 3
Call Girls In Sector 56
Escorts Service In Sector 53
honest person
escorts service in gurugram
clean girl