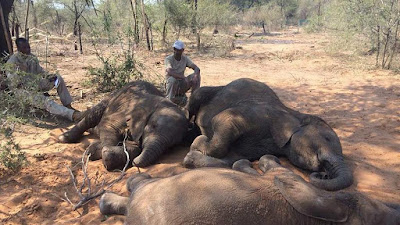 Nearly ninety elephants have been killed close to a famous park in the southern African country of Botswana, conservation group Elephants Without Borders have disclosed.

Almost all of the dead animals had their tusks removed stressing the view that the incident was directly connected to the activities of poachers.

Botswana has the world’s largest elephant population but according to Dr Mike Chase from Elephants Without Borders, the incident could have a devastating effect on its tourism industry. He is the scientist carrying out an extensive survey of the deaths.

I’m shocked, I’m completely astounded. The scale of elephant poaching is by far the largest I’ve seen or read about anywhere in Africa to date,Dr Mike Chase said

When I compare this to figures and data from the Great Elephant Census, which I conducted in 2015, we are recording double the number of fresh poached elephants than anywhere else in Africa, he added.

He also linked the incident to the disarming of Botswana’s anti-poaching unit since the coming into office of President Eric Masisi. The current deaths are said to have happened weeks back and further in the country close to the protected Okavango Delta wildlife sanctuary.

The Okavango Delta is a vast inland river delta in northern Botswana. It’s known for its sprawling grassy plains, which flood seasonally, becoming a lush animal habitat. It is described as Africa’s last eden.

The government at the time of disarming the anti-poaching unit did not give a reason for the move and has also yet to respond to the latest report. The survey is still underway and it is feared that the final figure could be higher.

This requires urgent and immediate action by the Botswana government. Botswana has always been at the forefront of conservation and it will require political will.

Our new president must uphold Botswana’s legacy and tackle this problem quickly. Tourism is vitally important for our economy, jobs, as well as our international reputation, which is at stake here as being a safe stronghold for elephants. said Mr Chase.