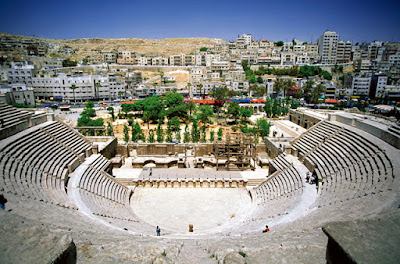 Downtown Amman with its Roman amphitheatre
For the first time, the world’s largest commercial plane will fly regularly from Dubai to Amman, Jordan.

Emirates Airways announced on Thursday that it will be deploying its A380 on the route for four months this year to meet high passenger demand during summer.

From June 1 to October 26, the Dubai-based carrier will operate one of its three daily flights between Dubai and the Jordanian capital. It will be the first time that the airline will operate a scheduled A380 service to Amman, following the historic one-off A380 flight in September 2016.

The service upgrade will help Emirates cope with increased visitor traffic to the tourist destination, which is home to numerous ancient ruins. It is also in line with the company’s strategy to strengthen its presence in key markets.

Emirates has been operating the world’s biggest plane for more than a decade. Since its first flight to New York from Dubai in August 2008, the A380 has transported more than 105 million flyers.

A three-hour flight from Dubai, the capital city of Jordan is a fascinating fusion of old and new.

Or try the boutique Bonita Inn a converted 1950s house, with a tapas restaurant and garden terrace, where you can enjoy breakfast. Plus, it’s just 15 minutes from Rainbow Street. It costs 60 dinars (Dh312) per night for two.

Towering above downtown Amman, the ancient Citadel an archaeological site is a must-see not just for the ruins, you can see the second-century AD temple of Hercules but also for the views, which take in the two contrasting sides of Amman.

The modern, green Abdoun area referred to as the Beverly Hills of Jordan and the poorer downtown East Amman.

During Ramadan the Citadel comes alive and traditional cafés and handicrafts are set up among the lit-up ruins. Walk to the downtown area from here and visit the 6,000-seater, second-century AD Roman theatre.

Jafra in old Amman is a must visit, it’s a little grungy, but has a balcony, an oud player and great dishes like arayes, a sandwich of spiced minced lamb.

Another culinary institution is Hashem a favourite of His Majesty,a tiny café downtown, which dishes up delicious falafel, hummus and sweet mint tea.

The health conscious should head to eco-eatery The Wild Jordan Café on Rainbow Street. Enjoy veggie food, herbal teas and smoothies on the terrace in the evening, while overlooking the Citadel.

You can book tours to Jordan’s various nature reserves here. Rainbow Street is home to many restored houses-turned-cafés and is buzzing at night.

There are lots of modern malls, but to experience the real strains of Amman, visit the main souq area in downtown – King Al Hussein Street features lots of trashy kitsch and Jordanian souvenirs, from 100 per cent Bedouin-made rugs, to mosaic plates and Dead Sea products.

Rainbow Street, the city’s most walkable and interesting quarter, is home to charming boutiques and antique emporiums selling locally made products.

Between May and October and excluding Ramadan, visit Souq Jara here which on Friday evenings comes alive with stalls offering handmade, recycled pieces, knick-knacks and antiques, as well as local food stalls and local musicians entertaining.

As it boasts more than 100,000 archaeological sites, it’s worth getting a guide to explain things, 20 dinars (Dh105). While here, watch the re-enacted Roman chariot races in the theatre - 11am and 2pm daily.

If you visit in July/August, the Jerash International Festival is on, a lively cultural event with performances by international and local artists and musicians.

Visit the second-hand market, Souq Jara. It’s just off Rainbow Street with a strip of great vintage stores nearby. Also, visit Books@cafe in the evening.

An absolute must-visit is the Eco-Tourism Café, it’s the oldest townhouse in Amman and has a terrace overlooking the bustling streets below. Order sage tea and watch the world as you enjoy your money .