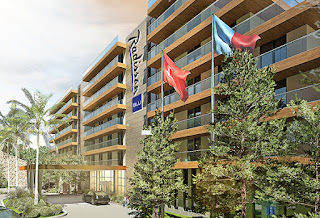 The Rezidor Hotel Group is proud to announce the signing of the first Radisson RED in Georgia. The new build city center stand-alone hotel will be located in the heart of the city on Chavchavadze Street. The Radisson RED Chavchavadze, Tbilisi is expected to open its doors in mid-2019, and will feature 100 rooms.

The hotel will open in Q2 2018 featuring 162 rooms, meeting rooms and a spa equipped with a swimming pool. The Radisson Blu Hotel, Trabzon will also have a large rooftop bar and café with panoramic views over the city and Boztepe Park, adjacent to the hotel.

Elie Younes, Executive Vice President & Chief Development Officer of Carlson Rezidor Hotel Group said: “This signing is in line with our growth strategy in Turkey where we are a leading player. We are pleased to enter the Trabzon market which is lacking internationally branded hotels and offers great opportunities. We look forward to further supporting travel & tourism in the city and the country together with our experienced partners”.

As the main city on the coastline of the Black Sea, Trabzon offers enormous potential as a business and leisure destination. The city is a major trade center as well as the capital of the Trabzon province, and thus a perfect fit for a global upper upscale hotel brand like Radisson Blu.”

Trabzon offers a number of cultural highlights including several museums, the famous Trabzon Castle as well as the home of the first Turkish president that are all open for visitors. There are also several monasteries of interest in the local area and the hotel will be located very close to the city center for guests, hosting a hub of shops and restaurants around the main square.

Turkey, the 6th most popular tourist destination in the world, is an increasingly important region to Carlson Rezidor. There are development plans in Trabzon, including building an artificial island to further attract tourism to the Black Sea.
at January 03, 2017

I’m here to testify about what DR. ISIBOR did for me. I have been suffering from (GENITAL HERPES VIRUS) disease for the past 3 years and had constant pain and inching, especially in my private part. During the first year, I had faith in God that i would be cured someday.This disease started circulating all over my body and I have been taking treatment from my doctor, few weeks ago I came across a testimony of Rose Smith on the internet testifying about a Man called DR. ISIBOR on how he cured her from 7 years HSV 2. And she also gave the email address of this man, advise anybody to contact him for help on any kind of diseases that he would be of help, so I emailed him telling him about my (HSV 2) he told me not to worry that I was going to be cured!! Well, I never doubted him I have faith he can cure me too,, DR. ISIBOR prepared and sent me Healing Oil, Soap, roots and herbs which I took. In the first one week, I started experiencing changes all over me, after four weeks of using his Roots/ Herbs, Oil and Soap, I was totally cured. no more inching , pain on me anymore as DR. ISIBOR assured me. After some time I went to my doctor to do another test behold the result came out negative. So friends my advise is if you have such disease or know anyone who suffers from it or any other disease like HPV, HIV, ALS, CANCER etc. you can contact DR. ISIBOR for help via email} drisiborspellhome@gmail.com or call +2348107855231