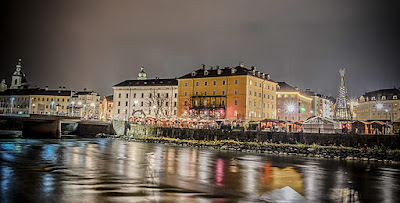 Last year the Christmas market on Innsbruck’s Marktplatz was once again given its own landmark in the form of a magnificent crystal tree. With 170,000 crystals and over 200 custom-made crystal balls, the 17-meter work of art designed by Andreas Altmayer shone even brighter in 2013 than at its premiere in 2012.

The construction had a glass surface area of more than 100 square meters and was topped by a 45-centimeter crystal star, a particularly good view of which could be enjoyed from the kaleidoscopic center of the tree. Together with its decorations and supporting structure, the crystal tree weighed around 13 tons.

Installation work was completed on November 6, 2013. On November 15, 2013, the Christmas market opened and 200 LEDs lit up the unmistakable symbol of advent in Innsbruck. The tree brought together tradition and innovation, with the latest LED lighting technology implemented by Garamanta GmbH ensuring energy-saving brilliance. The crystal tree was on display from November 15, 2013 to January 6, 2014.

Other Swarovski Christmas trees could be admired in cities including New York, Paris, Shanghai, and Rio de Janeiro throughout the holiday season. As such, the tree on Innsbruck’s Marktplatz creates a link with people looking forward to Christmas all around the world.

Nevertheless, this particular Swarovski Christmas tree is unique in that it is the grandest and most elaborately designed of them all as a special tribute to the home of the company.
at December 19, 2016