Egypt And Oman Partner To Invest In Tourism And Hospitality 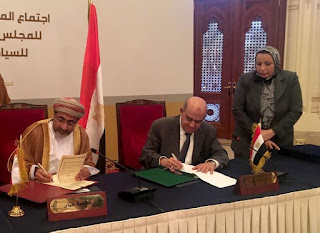 Oman today signed a Memorandum of Understanding (MoU) with Egypt to invest in the tourism and hospitality sectors.

According to Omran, the Sultanate's master developer, the main objective of the MoU is to invest in the tourism and hospitality sector, participation in travel fairs/ exhibitions in each other’s counties and encouraging cooperation between tourism stakeholders including hotels and tour operators.

“Additionally, they will exchange expertise in areas of promotion, marketing, destination development and management,” an Omran spokesman said.

The MoU was signed between Ahmed Bin Nasser Al Mahrizi, the Minister of Tourism, and Mohammed Yahya Mohamed Rashid, Minister of Tourism in Egypt, at the Executive Office meeting for the 19th Arab Ministerial Council held at Al Bustan Palace Hotel in Muscat.

During the meeting, the minister said that it is a great opportunity to curate recommendations that will facilitate tourism within the Arab world.

“The strategies and policies that will be implemented will highlight Arab tourism to the world stage, which can only be done through the close cooperation of the Arab States,” the minister added.

Meanwhile, the Egyptian minister said that the exchange of ideas and expertise in this meeting enriches the tourism sector in the Arab countries as a whole.

“The role of tourism in the Arab world is a significant one that we aim to develop and to build, attracting tourists from around the world to discover the Arab countries,” he added.

The task of the Executive Office is to follow-up on the implementations of the Council’s previous resolutions and recommendations, including discussing the report regarding the development and implementation of the Arab Tourism Strategy.

The Council also discussed the ways to maintain architectural heritage as well as the standards of tour operators and media vendors.

The participants also identified institutions that will help the development of joint tourism as well as organisations that focus on marine-based competitions.

The meeting concluded with summarizing the latest tourism statistics and presenting the “Businesswomen Incubators for tourism” project, which aims to provide investment and employment opportunities for women in the Arab world.
at December 14, 2016