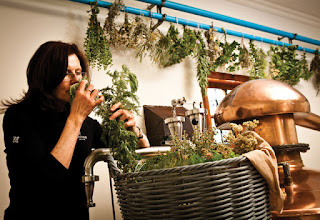 A growing taste for premium spirits among an emerging South African middle class has spurred an explosion in boutique gin producers who are using unique local ingredients to flavor their drinks.

About a dozen new craft gins have gone on sale in the country in the past 12 months, according to Lorna Scott, founder and owner of the Inverroche distillery, in Stilbaai, about 340 kilometers (212 miles) southeast of Cape Town. “At the base of this gin craze is a strong move towards finding flavors that have very strong local roots,” she said by phone from the coastal resort town, where she infuses gin with fynbos -- plants found only in the region -- in batches of a few hundred bottles at a time.

Scott and rival boutique producers are providing increased competition for the likes of Diageo Plc, whose brands including Gordon’s have long been big sellers in the local gin market. While all gin is made from a juniper berry base, South African drinkers are developing a liking for flavors of African ginger and Kalahari truffles in their spirit. In the latest sign of growing popularity, Johannesburg hosts its first two-day gin and tonic festival this week.

Craft operations like Scott’s and others, including the Woodstock Gin Company and Musgrave, are seeking to accelerate a switch to gin among more-affluent South Africans. About 5.3 million black adults are middle-class, in households earning as much as 50,000 rand ($3,450), the University of Cape Town’s Unilever Institute of Strategic Marketing estimates. That compares with about 2.7 million middle-class white adults, out of a population of 55 million. Gin consumption is forecast to rise by 4.3 percent to 6 million liters this year, local industry figures show.

Inverroche doubled its production every six months “and we continue to do so,” Scott said. “When we started, we did about 100 bottles per month and we are way beyond that now.”

The fashion for premium gin has even attracted winemakers, with Blaauwklippen estate producing a range that incorporates flavors from Karoo shrubs and rooibos tea plants. Gin’s new incarnations have led to a drink that is “sexy and trendy” to South African consumers, Blaauwklippen Cellar Master Rolf Zeitvogel said by phone from Stellenbosch, near Cape Town.

Scott and her peers are also pursuing export markets. Inverroche is available in the U.K., where it costs about $50-$56 a bottle, Norway, Denmark , Sweden, Belgium, Germany, the Netherlands, Switzerland and Singapore. Last week saw the first order from Canada.