THAILAND: Full Moon Party At The Land Of Smiles 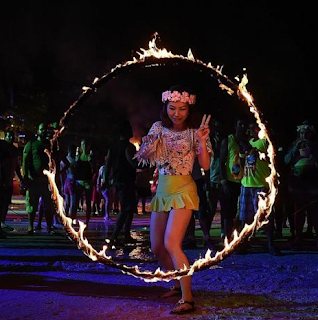 For many ravers on the tropical oasis of Koh Phangan, the origins of the Thai island's debauched full moon parties are as hazy as their memories of the beach bash the next morning.

Yet Mr Sutti Kursakul, a middle-aged island native with a distinctive black moustache, claimed he not only remembers the first moonlit party, but also organised it.

"I held the first full moon party in 1988. It was a farewell to my Australian friend," Mr Sutti said as neon-clad tourists flowed in and out of his bar, vibing to house music.

What started as a monthly gathering for spiritually-inclined trance fans in the 1990s has since exploded into a world-famous monument to hedonism.

Up to 30,000 people, mostly young Western backpackers, descend on Haad Rin beach each month to guzzle buckets of booze and jump through hoops of fire - an increasingly perilous beachside activity as the evening's intoxication takes hold.

Now thumping electronic dance music has replaced the psy-trance beats of the 90s, while a cottage industry of neon clothing and body-paint vendors has turned the beach into a one-stop shop for the party faithful.

They Keep on comming despite junta run political woes and a month-long "toning down" of the kingdom's usually wild nightlife, following the death of beloved King Bhumibol Adulyadej in October.

Through a decade of military coups and curfews, Thailand's buoyant tourist industry has kept the economy afloat.

The Land of Smiles has already welcomed more than a record 30 million tourists this year.

They are expected to rake in more than US$68.5 billion (S$99 billion), which represents 17 per cent of the economy.

Over the years, the full moon party has often been cast as a depraved, crime-ridden fest, where foreigners trash their idyllic surroundings and take excessive risks.

"The Western media is so negative," said Mr Sharon Kahatai, an Israeli hostel owner who made the island his home nearly a decade ago.

"I think the full moon (party) is an amazing project. I don't know if there are other projects like that which bring young people, 18 to 22, from all around the world to be together."

Some old-school ravers say the notoriety and commercialism are changing the event for the worse.

But Mr Sutti insists the spirit is the same.

"Nothing has changed about the full moon party - just more people," he said, stressing how the revellers bring crucial cash into the pockets of locals.

But hedonistic fixtures of Thailand's nightlife, such as the full moon party, appear safe.

Cyclical crackdowns on Thailand's freewheeling party scene never seem to stick and the beach rave shows no sign of slowing down.

"It's obviously popular with many people," said Mr Chattan Kunjara Na Ayudhya, the public relations director of Tourism Authority of Thailand.
at December 27, 2016