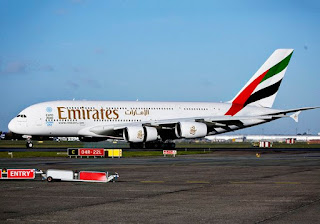 The 16-hour-and-a-half flight that was nearly full, took off at 3.30am Dubai time early Thursday morning becoming the 11th gateway to the USA — and the second to Florida — complementing Orlando that was launched last year, according to Hubert Frach, Emirates Divisional Senior Vice President, Commercial Operations, West.

Addressing journalists from Florida, a fleet of reporters from the UAE media, VIPs and members of the aviation authorities in Fort Lauderdale, Frach said: “At Emirates, we’re proud to be global connectors of people, places and economies. Today’s flight carried passengers from North America, the Far East, the Middle East, South Asia, the Asian subcontinent and Africa – a powerful demonstration of that point.”

Emirates launched its 11th destination in the United States with the start of a daily non-stop passenger service between Dubai and Fort Lauderdale-Hollywood International Airport [FLL].

“In fact," said Frach, "it is the first scheduled commercial service from the Middle East in the airport's history. Our new daily service to Fort Lauderdale will significantly enhance South Florida’s commercial and cultural connections. Emirates is proud to connect people across the globe and today’s inaugural flight illustrates the reach of our global network and the potential tourism and trade opportunities of our daily service."

The launch of the historic route, he said, "will allow us to offer Emirates' unique product and award-winning service to passengers flying to and from South Florida to our home in Dubai,” Frach told a press conference shortly after the landing at Fort Lauderdale-Hollywood International Airport.

Meanwhile Mark Gale, CEO and Director of Aviation in Florida, said FLL is proud to welcome Emirates, one of the world’s premiere airlines to Broward County.

“This new service to Dubai, and ultimately to the rest of the world, will provide our community with tremendous business and travel opportunities. With an estimated annual economic impact to our region of more than $105 million and approximately 1000 new jobs as a direct and indirect result of Emirates arrival, we are confident this new service will mark the beginning of many more great things to come,” he said.

The new service operates as flight EK213, departing from Dubai International Airport at 3:30am local time and arriving at FLL at 10:55am.

Present at the event was Broward County Mayor Barbara Sharief, who said FLL is one of the fastest growing airports in the US, servicing more than 29 million passengers this year.

“We are proud to partner with Emirates Airline as together we make history by offering the first non-stop flight service from South Florida to the Middle East and beyond. Broward County is a leading destination market for tourists and an economic hub for businesses large and small. We have recently invested $2.4 billion to expand and renovate our airport to insure world class service now and in the future,” she said.

Fort Lauderdale is one of the most popular tourist destinations in the United States thanks to its abundant sunshine and temperate weather.
at December 16, 2016