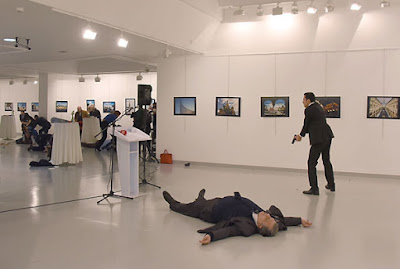 Andrey Karlov , the Russian ambassador to Ankara, lying on the floor after being shot by a gunman (R) during an attack during a public event in Ankara. A gunman crying "Aleppo" and "revenge" shot Karlov while he was visiting an art exhibition in Ankara on December 19, witnesses and media reports said. The Turkish state-run Anadolu news agency said the gunman had been "neutralised" in a police operation, without giving further details.

Andrei Karlov stumbles as the bullets hit him in the back, then comes crashing to the ground.

The press had come to cover the opening of a show at an Ankara exhibition hall Monday, but their cameras ended up capturing the chilling scene of the Russian envoy's murder at the hands of a Turkish policeman.

Images from shortly before the shooting showed a clean-shaven officer standing discreetly behind Karlov in a white shirt, dark suit and tie,apparently a bodyguard for the ambassador as he gave a speech at the exhibition.

But footage from minutes later showed the man brandishing his gun at shocked onlookers, jabbing his finger in the air and pacing backwards and forwards as Karlov lies motionless on his back.

He shouts "Allahu Akbar" ("God is greatest") and then talks about pledging allegiance to jihad in accented Arabic, the images showed.

The terrified guests meanwhile cower behind tall cocktail tables laid out for the exhibition opening.

Immediately after the shooting at 19.05 (1605 GMT), police entered the building and were later followed by special forces, Turkish interior minister Suleyman Soylu said.

The state-run Anadolu news agency said the gunman had been "neutralised" in a police operation inside the hall after 15 minutes of clashes when he refused to surrender.

Photos showing the man lying on the ground, riddled with bullet wounds, quickly began to circulate on social media.

The Russian ambassador was taken to Ankara Hospital where he was pronounced dead despite efforts to revive him, Soylu said.

The minister identified the attacker as Mevlut Mert Altintas, 22, who had worked in the Ankara anti-riot police for the last two-and-a-half years.

Reports said that his mother, father and sister were immediately detained for questioning in their home in western Turkey.

Ankara mayor Melih Gokcek speculated on his official Twitter account that the policeman may be linked to the group of exiled preacher Fethullah Gulen, who is blamed for the July coup aimed at toppling President Recep Tayyip Erdogan.

The shooting came on the eve of a crucial meeting between the Turkish, Russian and Iranian foreign ministers on the Syrian conflict.
at December 20, 2016