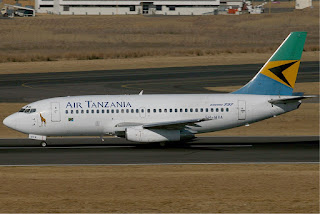 ATCL will however add more routes next year, with flights to Mtwara - Tanzania's gas capital - Dodoma - the country's political capital - but also Songea and Tabora named.

Out of the airline's hub in Dar es Salaam, where next year the new international terminal will open its doors, does Air Tanzania presently serve Kilimanjaro/ Arusha, Mwanza and Zanzibar while the only international route flown is the Comoros islands.

Another Bombardier Q400NG has joined the fleet - expected in 2017, will the airline consider returning to regional routes like to Entebbe and Nairobi.

The delivery of two Bombardier C300 jets, due to join the fleet either in the second half of 2017 or early 2018, will then open the doors for flights to other African destinations and possibly as far as Dubai, currently only served by foreign airlines like FlyDubai and Emirates.

The Tanzanian government has over the past months paid nearly 300 million US Dollars for the purchase of a total of five Bombardier aircraft and the down payment to Boeing of a 10 million US Dollars commitment fee for a B787 Dreamliner due for delivery in the second half of 2018.

Domestic competition is said to be fierce now as two other airlines, besides the safari airlines like Auric and Coastal, vie for market share, among them Precision Air and Fastjet. Travelers can expect special deals and low fares for the time being as the battle for the Tanzanian skies takes a new dimension.
at December 30, 2016