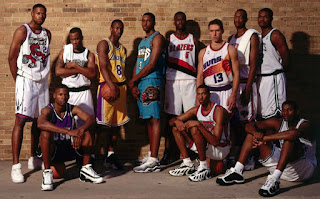 And while that class holds up as arguably the best ever when expanded out to solid second-round picks like Kyle Korver, Mo Williams and Zaza Pachulia, if you delve just a little deeper into draft history, another year stands out for the magnitude of the stars it produced. The year was 1996, when future league legends like Kobe Bryant and Allen Iverson realized their dreams of becoming NBA players.

As is the case with every draft, however, teams didn’t exactly get it right. For instance, Bryant — a future five-time champion and 18-time All-Star — fell to No. 13 overall before being selected by the Charlotte Hornets.

Following Bryant's retirement, PointAfter, a sports data visualization site that’s part of the Graphiq network, set out to right the wrongs by re-picking the ’96 draft. Based on each player’s career win shares (an estimate of the number of wins contributed to a team by a player) and accolades (All-NBA teams, MVPs, championship rings, All-Star berths, etc.), we re-ordered the draft to better reflect the “correct” order in terms of how guys panned out in the pros.

Note: There are 29 first-round draft slots because 29 NBA franchises existed in 1996, rather than today's total of 30