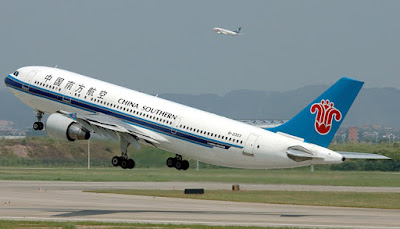 China Southern Airlines, the country's largest airline, is introducing the world's largest passenger aircraft - the Airbus 380 - on its Istanbul route, due to an increased interest in Turkey.

The use of such aircraft and Turkey's flag carrier Turkish Airlines' (THY) new destinations in China, including the central northwestern city of Xi'an, will help Chinese companies bring more tourists to Turkey.

Turkey has seen high interest from Chinese tourists in recent years, boosted by improving cultural and economic ties between the two countries.

According to the Culture and Tourism Ministry data, some 292,000 Chinese citizens came to Turkey in the first eight months of this year, an increase of 12.66% compared to the same period last year.

If this upward trend continues, the number of Chinese tourists is expected to hit 500,000 by the end of the year.

As Chinese airlines launched flights to Turkey one after another to get their share, Chinese companies with existing lines to Turkey have also scheduled additional flights from new destinations.

Last May, China Southern Airlines launched flights from Wuhan, the largest city in Central China with a population of around 11 million, in addition to its Beijing line.

Regarded as China's largest airline in terms of fleet, the company schedules flights from Beijing's Capital airport. And the airline is now planning to carry more passengers to Turkey by expanding the type of aircraft due to intense demand from its citizens.

With necessary permits, the company will resume its flight from Daxing, the second airport of Beijing, to Istanbul Airport with the Airbus 380, which can carry up to 853 passengers in a single-class economy configuration or 555 passengers if in a three-class configuration.

This number is expected to approach 500,000 this year and surpass 750,000 by 2020. The number of Chinese tourists in the country is expected to rise to 1 million in two years.

Chinese citizens mostly visit Cappadocia, one of the prominent destinations frequented by Chinese tourists in Turkey, Pamukkale, Ephesus and Istanbul.

Meanwhile, Airbus 380s could not use now-closed Atatürk Airport except for special operations due to the lack of suitable runways and taxiways.

However, with runways, taxiways and passenger bridges fit for wide-body aircraft, Istanbul Airport can easily accommodate the A380.

Airbus previously announced that it would halt the production of A380 passenger aircraft and that the final delivery would take place in 2021.

Established on 1 July 1988 following the restructuring of the CAAC Airlines that acquired and merged a number of domestic airlines, the airline became one of China's "Big Three" airlines alongside Air China and China Eastern Airlines, the world's seventh-largest airline measured by passengers carried and Asia's largest airline in fleet size, revenue, and passengers carried.

The airline started a frequent flyer program partnership with American Airlines in March 2019. The logo of the airline consists of a kapok flower which is also the city flower of Guangzhou on a blue tail fin.

It was previously at 278 Jichang Airport Road in Baiyun District.

China Southern had plans to open a new headquarters facility on a 988-acre (400 ha) site on the outskirts of Guangzhou, about 4 miles (6.4 km) from Guangzhou Baiyun International Airport. Woods Bagot won a competition for the architect firm which would design the facility.

The proposed site consists of two parcels of land on opposite sides of a highway leading to Baiyun Airport; both sites are shaped like wings. The site will have a bridge and light rail system that operates above the highway to connect the two parcels, which will each have distinct functions.

For instance, the east parcel will house internal functions such as the data center facilities, staff dormitories, and the training center. The airline wants it to be aesthetically pleasing from the air since it sits below a runway approach.

The site will have a lot of outdoor space, which Woods Bagot designed along with Hargreaves Associates and Sherwood Design Engineers.

The airline plans to continue to develop Chongqing and Urumqi as hubs as well to exploit the domestic market potential.

China Southern offers 485 flights a day from its Guangzhou hub and 221 from its Beijing hub. The airline provides services to 65 international destinations.

China Southern Airlines has developed an extensive network to Southeast Asia and also has become the Chinese airline with the largest presence in Australia.

China Southern is also considering expanding into the South American markets, as well as further expansion into the African market.

On 13 November 2017, China Southern Flight 6406, a Boeing 737-800, with 151 passengers, was en route at 7800 meters (FL256) about 90 nm southwest of Changsha (China) when the crew received a cargo smoke indication and decided to divert to Changsha Huanghua International Airport.

The aircraft landed safely on runway 36 about 20 minutes later. The crew initiated an emergency evacuation via slides; one passenger was injured - sprained ankle during the evacuation. Emergency services found no trace of fire, heat or smoke.

On 5 January 2018, during a blizzard that hit the northeastern United States, a China Southern Boeing 777-300ER's wingtip struck the tail end of a Kuwait Airways Boeing 777 while taxiing at New York's John F. Kennedy International Airport, causing damage to both aircraft. Nobody was injured.

In 2013, the United States Department of Agriculture (USDA) ordered China Southern Airlines to pay $11,600 in fines for violations of the Animal Welfare Act (AWA) during the airline's transport of monkeys to laboratories in the United States.

The USDA found the airline had transported more than 1,000 monkeys into the United States without federal permission to do so and had transported the animals in insecure crates.

Previously, the airline had been ordered to pay $14,438 for AWA violations during one transport that left more than a dozen monkeys dead after they went without food and water for an extended period of time.

Following these most recent violations, China Southern announced that it would no longer transport monkeys to laboratories. PETA had protested against the airline for these shipments.
at November 17, 2019