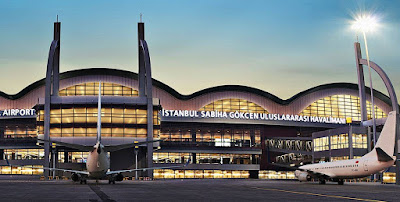 The Malaysia Airlines flight landed at the airport at noon. The Airbus A330 aircraft was welcomed with a water salute to mark the occasion.

The flight crew was greeted with bouquets and the passengers received some Turkish delight. It was followed by a cocktail where a custom made cake was cut.

The number of Turkey-Malaysia flights has increased in recent years. The weekly flights from Sabiha Gokçen Airport will be on Saturdays until Jan. 11, 2020.

Located 32 km southeast of the city center, Sabiha Gokçen Airport is in the Asian part of the bi-continental Istanbul and serves as the hub for some airlines, including Pegasus Airlines as well as a secondary base for Turkish Airlines and Borajet.

The facility is named after Sabiha Gokçen, adoptive daughter of Mustafa Kemal Ataturk and the first female fighter pilot in the world.

Although Istanbul Airport, located 63 km away on the European side of Istanbul, is larger, Sabiha Gokçen is still one of the largest airports in the country.

The airport was built because Ataturk International Airport located on the European side was not large enough to meet the booming passenger demands both domestic and international. The airport opened on 8th January 2001.

In mid-2008, ground was broken to upgrade the international terminal to handle 25 million passengers annually. The new terminal was inaugurated on 31 October 2009.

In September 2010, the airport was voted the World's Best Airport at the World Low Cost Airlines Congress in London and received the award.

The other awards received by the airport in 2010 were: Turkey's Most Successful Tourism Investment 2010, the highly commended award from Routes Europe, and the Airport Traffic Growth Award by Airline News & Network Analysis web site anna.aero.

With 28,285,578 passengers and 206,180 aircraft movements in 2015, Sabiha Gokçen International Airport is the third busiest single-runway airport in the world, after Mumbai and London Gatwick.

However, both Mumbai and Gatwick actually have two runways and are only considered single-runway because they can only operate the second runway if the main one is out of use. This makes Sabiha Gokçen the world's busiest true single-runway airport.

A second runway is currently being built and is expected to be operational in June 2019. The second runway will increase the hourly capacity from 40 to 80 movements. After the second runway is built, Lindbergh Field in San Diego will be the busiest true single runway airport in the world.

On 23 December 2015 at approximately 2:00 AM, explosions were reported to have occurred in a parked Pegasus Airlines aircraft, killing one cleaner and wounding another inside the plane.