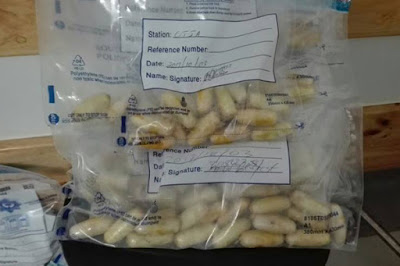 Our efforts to thwart the lucrative drug trade in our province have led to the arrest of another drug mule on Monday 2 October 2017, at Cape Town International Airport.

The 37 year old suspect was under observation when he entered our borders on a flight from Brazil.

He was taken to a medical facility where 122 parcels of cocaine wrapped in latex which he swallowed were extracted.

His court date for 4 October 2017 was postponed in his absentia until 6 October 2017 in Bellville as all the parcels have not been discarded as yet.

The value of the drugs is yet to be established.

Meanwhile,pursuit to tackle the crime generators of this province, members attached to Operation Combat focused their attention on a residential property situated in Taaibos Street Lentegeur.

Three males were arrested for being in possession of a substantial quantity of drugs and cash.

The premises was identified as a drug outlet which prompted the search operation.

Tik and mandrax tablets as well as cash totalling R23 500-00 were confiscated.

The suspects are due to make a court appearance in Mitchells Plain once they have been charged.