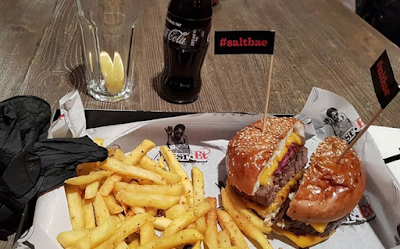 From salting steaks to serving burgers, the viral social-media star Salt Bae is on a mission around the world to expand his brand.

In February, it was announced that Chef Nusret Gokce, the man behind popular steakhouse Nusr-Et, which in Dubai is based at the Four Seasons Resort Dubai at Jumeirah Beach, will open a burger joint in New York City later this year. He already has four branches of Nusr-Et Burger in Istanbul.

Now, it seems he's going to open another branch in Dubai, too, as he revealed to his 20 million-plus followers over his Instagram Stories on Tuesday that a "Saltbae burger will be opening soon in DIFC Dubai".

There was previously a Nusr-Et Burger shop in Dubai Parks & Resorts, but it has shut down.

Signatures are done, he wrote, alongside an image of him signing documents alongside DIFC officials. He shared further snaps of him at Gate Village, saying the new restaurant would be open after three months.

Nusr-Et Dubai is already somewhat of a phenomenon in the city, attracting most celebrities who step foot here. The steakhouse has been frequented by the likes of Rio Ferdinand, Leonardo DiCaprio and Sheikh Mohammed bin Rashid, Vice President of the UAE and Ruler of Dubai.

We just hope this new burger spot has an excellent wall mural like the Istinye Park branch has:

Nice post!
Thanks for writing the post! I was wondering what goes beyond the screen developing the awesome app. Covered all the aspects of developing a great food ordering app. I would like to recommend you to order veg food online in Dubai. Bombay Basera
They have experience in building apps for various industries and under different app categories.

I got here much interesting stuff. The post is great! Thanks for sharing it! UK Based African Restaurants