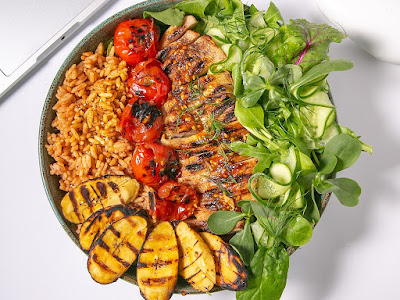 2019 might will be the year that West African food, with its bold flavours, thrifty use of high-fibre fruit and vegetables, complex tastes and contrasting textures, begins to receive the international culinary appreciation it deserves.

Social media is awash with images of West African dishes, the number of blogs celebrating the cuisine is on the rise, and restaurants serving modern interpretations of the traditional food of Sierra Leone, Senegal, Gambia and Nigeria, in particular, are slowly but surely opening up all over the world.

At the end of last year, fine-dining restaurant Ikoyi in London became the first West African restaurant to be awarded a Michelin star.

While ingredients such as yams, Scotch bonnet peppers, guava, black-eyed peas, cocoyam and cassava might not yet be part of the average cook’s daily repertoire, they are becoming well known and used.

Gbemi Giwa is from western Nigeria and is the creative force behind Catfish.

The restaurant delivery service in Dubai showcases West African food in a holistic way, using modern cooking and wellness techniques to produce a menu that is free from gluten, genetically modified ingredients, dairy and refined sugar.

When asked about this wave of interest in the food of her homeland, she points out that trying to encapsulate the recipes, dishes and culinary history of so many different countries under one umbrella term or in a few words is tricky to say the least.

West African cuisine is as nuanced and diverse as the hundreds of ethnic groups in the region, so it’s hard to place a collective label on the numerous dishes across the region.

That being said, one of the few things that ties dishes across the region is spice; we use a variety of peppers in our food and you can always expect big, bold, hot flavours, she says.

Giwa adds that beans, plantains, yams, peanuts and tomatoes feature in many recipes, and that variations on starchy staples such as fufu, eba, banku and amala are eaten in almost every country, as are soups cooked in palm oil with local spices, garnished with amaranth, bitter leaves and ugwu.

Much like Giwa, London chef, food blogger and cookbook author Lope Ariyo is committed to not just bringing West African food to wider attention, but also making it more accessible.

Nigerian-­British Ariyo grew up in the UK, but spent two years at boarding school in Nigeria, and says that this proved formative in shaping her appreciation of food and cooking.

Most Nigerian meals centre on rice or tubers, and are usually accompanied by some sort of stew with onions and peppers at the base, she explains. When I came back to the UK, I was constantly trying to replicate the dishes I had eaten she adds.

She describes her current cooking style as contemporary Nigerian.

From time to time, I keep it traditional, but for the most part my cooking reflects me and my experiences, so I like to mirror that in what I do.

In London, you get to experience many different cultures and foods, and I’ll often taste something that makes me think: There are ingredients like this in Nigeria, I bet I could use this to make a different version of such and such dish.

Touted as a rising star in the cooking world and with a well-received cookbook on discovering the flavours of West Africa to her name, Ariyo is clearly on to something.

When I set out to write Hibiscus, I wanted to bridge the gap for people who had no idea about Nigerian food and needed a place to start, she explains.

I really believe that if people are more aware of key West African recipes, ingredients and products then they’re more likely to try them out, and have a better understanding of the flavours and cuisine.

The importance of jollof rice, one must-try item is fluffy orange-red jollof rice.

Make no mistake, this is no run-of-the-mill rice dish, and a large pan featuring grains simmered in a spicy, fragrant broth made from tomato and pepper paste, and laced with a subtle chilli heat is a staple at parties, weddings and other celebrations.

While it’s generally agreed that the dish originated in either Senegal or Gambia, the question as to where to find the finest jollof is far more contentious.

I’m obsessed with jollof, says Giwa. Every West African country has its version of the smoky tomato rice, but as a Nigerian, I’ve got to say that the Nigerian version is best. I’ve been cooking jollof since I was 12. We had it for lunch every Sunday, like clockwork.

However, for the most part, I’ve never known any two people make their rice the same way; everyone has their own secret touch, she says.

While authenticity and tradition might be all-important to some there have been culinary wars of words on the subject of jollof. 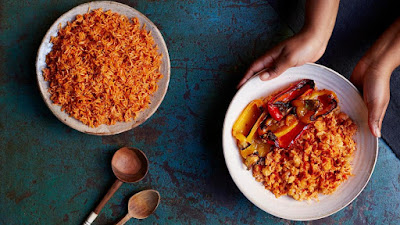 Steamed jollof rice
Ariyo takes a more relaxed approach: Because I never make my jollof the standard way, for me it’s been a way to make new friends, and start interesting conversations about what is right and wrong when it comes to Nigerian and other West African cooking.

Four other West African dishes that are popular:

Protein-rich roasted egusi melon seeds both thicken and add depth of flavour to this hearty, sustaining stew-like soup. While there are plenty of interpretations, more often than not the soup contains leafy greens such as spinach or collard greens, Scotch bonnet peppers and palm oil, as well as meat which often is chicken, beef or turkey or seafood such as dried shrimp and crayfish and spices, which result in a complex, highly satisfying dish.

The popularity of this street food snack, which is especially well-loved in Sierra Leone, Nigeria and Ghana where it is known as bofrot, is hardly surprising.

After all, what’s not to like about rounds of hot, crispy-on-the-outside, fluffy-in-the-centre deepfried dough finished with a smattering of sugar?

Often likened to doughnuts, French beignets and Arabic luqaiamt, puff puff, say those in the know, is utterly unique – it has a slightly chewier texture and specific flavour profile.

Healthy and sustaining yam porridge or pottage, potash or asara is eaten throughout West Africa.

Preparation techniques and ingredients vary depending on the region but, more often than not, this one-pan dish features yams boiled until tender and mashable, then simmered with peppers, tomatoes, fresh palm oil and a hint of spice.

Chicken is sometimes added and bitter leafy greens are stirred in towards the end. A comfort-food dish if ever there were one.

The tenderness of the meat is the result of several hours spent bathing in a piquant marinade rich with lemons, mustard and onions, which is then simmered and reduced down until the onions are soft and collapsing. Both meat and sauce are combined again towards the end, allowing the flavours to meld.

In a frying pan set over medium-low heat, melt the coconut oil and add the tomato puree, Scotch bonnet, ginger and onion. Fry for 5 minutes until the onion takes on a red hue.

Add the chopped tomatoes – there’s no need to blend them, but you can do so if you prefer – along with the herbs, spices and salt. Stir well and continue frying for a further 5 minutes until the tomatoes become deep red.

Meanwhile, set up a steamer by filling a saucepan with water and bring to the boil. Place a steaming pan on top and bring the heat down to medium low. Remove the tomatoes from the heat and add the basmati rice.

Mix until the rice is well coated, then transfer the mixture to the steaming pan. Spread out evenly and top with the bay leaves.

Cover and steam for 30 to 40 minutes, fluffing the rice with a fork every 10 minutes to make sure it’s cooking evenly, until the rice is tender. Take the steamer off the pan, fluff the rice once more and spoon on to hot plates to serve. Eat with grilled chicken and fried plantain on the side.

Interesting Article. Hoping that you will continue posting an article having a useful information. Best West African Restaurant UK